The Warlock of Firetop Mountain iPhone 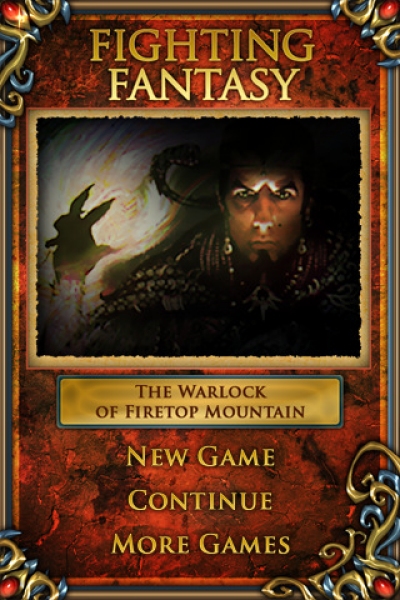 The Warlock of Firetop Mountain iPhone/iPad efficiently translates the classic Fighting Fantasy gamebook to Apple devices, providing a welcome chance for YOU to be the hero once more...

You are reading a review of The Warlock of Firetop Mountain conversion for Apple devices (iPhone, iPad and iPod Touch). For some reason the review is written in the second person, and in the format of the Fighting Fantasy books of which Warlock was the debut title.

Those books worked by the reader making choices as to how to progress the story, and flicking to the relevant numbered section to do so. So does this review. You can take one of these options to proceed:

If you would like some more background on Warlock, and the Fighting Fantasy series in general, go to Page 8.

If you already get the idea and want to cut to the bit about the story, go to Page 5.

If you find this whole narrative device tiresome and don't want to flip back and forth all day, go to Page 2.

Actually, each section of this review is a self contained discussion of an aspect of the game, with Page 10 being the conclusion, so you can read it straight through and it should still make (relative) sense.

Apart from Page 7 and Page 9, which are joke entries isolated from the rest of the review, and you should probably skip if you don't find this conceit amusing.

I first encountered The Warlock of Firetop Mountain, and the other books in Ian Livingstone and Steve Jackson's Fighting Fantasy series, when I was at primary school. These gamebooks were my first taste of fantasy role playing, and were incredibly evocative with their trolls, orcs, dragons and other stock fantasy monsters.

Re-playing Warlock on my iPhone, I was astonished by how evocative some of the imagery from this adventure was, and the memories the simple prose and Russ Nicholson's illustrations brought back.

The Ghoul, with its decaying flesh and sharp, poisonous finger nails, scared and fascinated me as a child (no thanks to Nicholson's compellingly horrible illustration) and doubtless contributed to me becoming the zombie and survival horror bore I am today.

If you would like to read about the story of the game, go to Page 5.

If you would like to read about the Fighting Fantasy series, go to Page 8.

If you want to skip to the final verdict, go straight to Page 10.

The iPhone translation of the Fighting Fantasy format is in many ways an improvement on how Warlock played in print: the interface is simple and clean, with optional 'flicking page' effects as you switch between paragraphs, much easier than painstakingly flicking back and forth through physical pages.

Dice rolls are performed by shaking your iDevice, and the numbers are calculated and deducted automatically. Having these calculations worked out for you, as well as updates to your inventory and stats, is incredibly convenient compared to having to use a pencil and eraser on the book itself - who else remembers wearing right through the stats page with constant writing and erasing?

One down side is that it's now impossible to cheat or just ignore the combat: the game locks invalid options, and there's no opportunity to reverse a bad decision and flick back to an earlier entry. However, after a death you can continue from the last page you were on, so a total restart isn't necessary every time you roll badly in combat.

If you would like to know more about the art and sound, go to Page 6.

If you would like to read about the story of the Warlock of Firetop Mountain, go to Page 5.

If you want to read about the history of Fighting Fantasy, go to Page 8.

The Warlock of Firetop Mountain was first published in 1982, less than a decade after the first Dungeons & Dragons rules were released, when fantasy role playing was in its relative infancy rather than the vast industry it is today.

Perhaps unsurprisingly, then, the book's story is an extremely straightforward, archetypal heroic fantasy narrative. You are a hero, seeking to kill the Warlock of the title, and to do so you need to adventure through the tunnels of Firetop Mountain.

Along the way you'll negotiate a maze and encounter such standard fantasy creatures as dwarves, trolls, giant rats, a minotaur and, of course, a dragon. There's also a maze, one so devious that I recommend bookmarking a map or walkthrough before you get to that bit.

No psychological realism, steampunk twists on the genre or social relevance here: just the old school thrills of sword, shield, and the desire to acquire a lot of gold pieces.

If you would like to read about the Fighting Fantasy books, go to Page 8.

If you would like to read about the reviewer's personal history with the Warlock of Firetop Mountain, go to Page 3.

If you would like to know the final verdict on this iOS version of Warlock, head on straight to Page 10.

Thankfully in transferring the book to iOS developer Big Blue Bubble haven't distracted too much from the prose and Russ Nicholson's original illustrations. The screen has a suitably archaic looking parchment effect, and during fights brief animated sword and claw swipes dash across the screen. There's a little atmospheric music, and simple sound effects as swords clash and so forth.

There's the option to have the pictures fill out with colour, although even with this on you get to see them in their black and white simplicity first. The colour choices are bold (with some digital texturing to fill out Nicholson's sparse backgrounds), and work well.

Overall this is a very sensitive visual and audio update of the original book, one which allows all the additions to be switched off if you want a more straightforward ebook experience.

If you would like to know more about how the game works on iPhone, go to Page 4.

If you would like to know about the game's story, go to Page 5.

If you want to cut to the chase and read the conclusion, go to Page 10.

As you advance down the corridor, you hear a scratching, squeaking sound. You raise your sword as a creature emerges from the darkness, eyes glowing ferociously as it twitches its wet nose in your direction. You must fight the Giant Rat to proceed.

The Warlock of Firetop Mountain was published in 1982 as the first in the Fighting Fantasy series of gamebooks. Created by Ian Livingstone and Steve Jackson, this range of role playing adventures took the traditional freeform, multiplayer roleplaying of Dungeons & Dragons and the like and turned it into a simplified, single player reading experience, complete with straightforward dice-based combat and randomised attributes like Luck and Skill.

The books were a phenomenal success throughout the 1980s, a potent combination of basic roleplaying (with the advantage of not needing to have a room full of friends to play with), archetypal fantasy and SF scenarios, and FF's slightly rebellious reputation as 'not real books' (as reiterated by nearly every school librarian and English teacher), which gave them a disreputable glamour irresistable to young boys.

Eventually falling out of fashion, in the 21st century many of the FF books have been reprinted for a more niche readership, and their continuing cult following has led to iOS versions of some of the books from Big Blue Bubble.

The Warlock of Firetop Mountain remains the most famous of all the books, and continues to launch any new iteration of the series, including this range for Apple devices.

If you would like to know why the writer of this review is so obsessed by these silly books, go to Page 3.

If you would like to learn more about how Warlock has transferred to iOS, turn to Page 4.

If you want to read more about the story of Firetop Mountain, go to Page 5.

You are dead. Your adventure is over.

Return to Page 1 to try again.

After all these years, The Warlock of Firetop Mountain is still an enjoyable adventure, and the intimacy of sitting down with a book neatly transfers to doing the same with a handheld iOS device.

The interface works well, and is sympathetic to both the printed origins of the material and the tone of the story. In many ways it feels like an improvement, removing the faff of carrying around dice, scribbling in the front pages of a book and having to do mental arithmetic.

Habitual gamebook cheaters will find themselves thwarted, though.

Nearly thirty years on, it's still a joy to adventure into the depths of Firetop Mountain (although less of a pleasure to negotiate the Maze of Zagor).

If you're nostalgic for your 1980s childhood, or just in the market for a straightforward fantasy adventure, I highly recommend giving this a try for your iPhone (or compatible device).

You can support Mark by buying The Warlock of Firetop Mountain