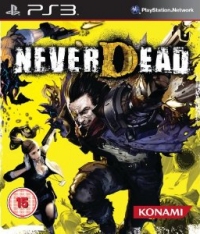 Other GamePeople columnists have reviewed this from their perspective - huh?:
Family Gamer (PS3)
Multiplayer Gamer (PS3) 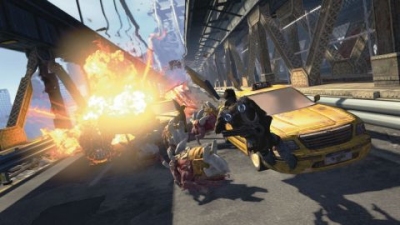 NeverDead PS3 is a game where you get painfully ripped limb-from-limb again and again. It's as much fun as that sounds.

The dramatic cliche about immortality is that it is a curse rather than a blessing, that living forever is initially novel but eventually takes its toll resulting in despair and ennui as the endless years go by.

NeverDead sadly lives down to that cliche, taking the promisingly original idea of an immortal protagonist who can regenerate his body parts after dismemberment but embedding it in an increasingly tiresome trudge of mediocre shooting and slashing.

NeverDead's storyline is very firmly in the 'Sorry? Pardon? What?' school of narrative beloved of Japanese game developers, a surreal premise barely explained. Bryce is a demon hunter who at some point a few hundred years ago was cursed with immortality.

After a battle with a camp renaissance-era demon, the game jumps forward to the present day (or possibly the near future), where Bryce has gone from shiny knight to dishevelled, unshaven mess. Saddled with a snappishly beautiful female partner, Arcadia, Bryce heads down to a deserted asylum to investigate a demonic outbreak.

Initially, I was impressed. Bryce and Arcadia approach the asylum on a beautiful sunny day, and the environments feel solid and nuanced. Initial engagements with the enemy are quite fun as Bryce's special ability is introduced: enemies can tear him limb from limb, and he can roll around putting his body back together again.

The dramatic cliche about immortality is that it is a curse rather than a blessing.

This is such an odd experience - hopping around on one leg, rolling around to pick up a lost arm while still firing at the enemies, or reduced to a severed head tumbling around looking for Bryce's torso - that the novelty factor overrides the niggling feeling that the controls are loose and clumsy.

Both targetting Bryce's guns and, to a lesser extent, slashing with his sword, feels imprecise, as does throwing yourself about gathering lopped-off limbs, but as failing at combat allowed me to mess about with the latter after I was dismembered it wasn't too much of a problem to begin with.

However, as introductions end and the game picks up the pace, the novelty wears off and niggles become irritations which become persistent complaints. Engagements with the enemy become tedious battles of attrition against wave after wave of the same baddies thrown out by Gauntlet-style generators, while the ease with which Bryce gets torn to bits by these enemies loses its appeal and just serves to further drag out overlong battles.

The final insult is the introduction of screeching, floor level creatures that will swallow Bryce severed head before it can reach the torso. Fail to complete a QTE and escape, and Bryce will be trapped for all eternity - an effective insta-death in a game that's supposed to be about immortality, and a threat that drains the last drop of fun and empowerment out of Bryce's regenerative abilities. Thanks, Konami!

It's a shame, aside from the high(lander) concept, the game has other merits - enemy designs are inventively grotesque, environmental destruction is impressive and there's a feeling of off-kilter eccentricity that evokes Shadows of the Damned and other such oddities.

Unfortunately, these characterful aspects can't stretch far enough to make up for a lot of elements that are bland and ill-conceived: the plodding, unwieldy combat; the stock characterisation and cliched, repetitive dialogue; and most of all the squandering of the immortality concept into a tedious nuisance that grinds the action to a halt.

You can support Mark by buying NeverDead