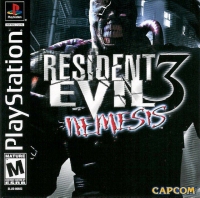 Resident Evil 3 on PSN and PSP is an urban nightmare notable more for the stories told by its setting and sense of place than the weak central narrative. As someone who is driven by games that tell a good tale, Resident Evil 3 both underwhelmed and intrigued me.

A few years back, bored during the Christmas break, I picked up Resident Evil 3: Nemesis from a pile of un-played PlayStation 1 games I had kicking around. Frankly, I wasn't hoping for much. It was already the era of PS2 and Gamecube, so I was reaching back to old technology, and my brief experiences of the original Resident Evil had been bruising and unrewarding.

But unexpectedly, that idle winter afternoon changed my life. It turned me into a zombie fan - an obsession that's shaped my gaming, viewing, reading and writing ever since. Resident Evil 3, in a stroke, established my love affair with Capcom. And the game itself is one I have gone back to again and again, on the PlayStation, Gamecube, Wii and PSP.

It's the story that keeps drawing me back. Like I said at the top, not the nonsensical central plot about Jill Valentine, trying to escape the zombified city having seemingly slept through the whole thing, but the less obvious tale told through the environments. A combination of documents, occasional scripted events and general dark undertones create a real sense of place. It's the recurring story that underscores a lot of contemporary horror, the nightmare-fantasy of a modern city collapsing into carnage and ruin.

A scribbled suicide note, a diary, a series of snapshots of the ever-advancing dead: mundane tales of the world ending.

With the exception of the odd gothic folly and obligatory secret lab, Raccoon City could be anywhere. Its locations are beguilingly normal: city streets, shops, offices, garages, gas stations, hospitals and graveyards. All these places are safe, familiar locations from our everyday world, but here they become uncanny and disturbing by the zombie presence and the evidence of the last days of civilisation: windows are boarded, make-shift barricades block the streets, bodies lie on the ground.

Sometimes those bodies get up, and you need to shoot them down again. Other times, a corpse is just a corpse, and you need to search it for items or notes, the latter telling bits of the fall of Raccoon City. A scribbled suicide note, a diary, a series of snapshots of the ever-advancing dead: mundane tales of the world ending. This is what affected me most about the story, finding the sad evidence of a conflict which was already settled, like picking through a war zone. And one of the easter eggs that kept me replaying was to receive Jill's own diary, which can only be obtained by collecting ever other document in the game.

Occasionally, you'll encounter a living character, but they either don't last long or are too busy working to their own agenda. Early on, a hapless citizen screams as they're set upon by zombies. You can't save them - all you can do is kill the zombies that are feasting on their corpse. Once the gunfire subsides, you're left with silence, punctuated by the haunting moans of the undead, echoing in the distance.

I love revisiting those deserted streets, to experience the terrible loneliness of being one of the last people alive in a city of the dead.

Post-apocalyptic narratives appeal because they allow us to voyeuristically thrill at terrible events happening not on some distant world or imaginary kingdom but in an everyday place like our own. It's an appealingly grim and relatable form of fantasy storytelling, one which works exceptionally well in games where the player is dropped into the world and left to find out things for themselves.

In spite of the fantastical premise, the crude 90s-era graphics, the ludicrous plot and corny dialogue, Resident Evil 3 Nemesis thrills me because of its artful portrayal of modern life laid to waste. I love revisiting those deserted streets, to experience the terrible loneliness of being one of the last people alive in a city of the dead. It's what keeps me going back to Raccoon City.

You can support Mark by buying Resident Evil 3: Nemesis