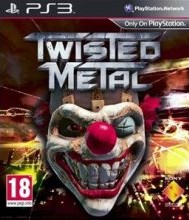 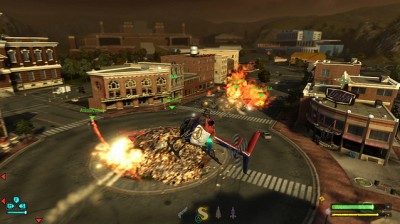 Twisted Metal PS3 is a bewildering, chaotic load of old nonsense for the adolescent metalhead in your life. Pee-ow! BOOM!

As becomes rapidly obvious, the name Twisted Metal isn't just a reference to the results of head-on collisions in the game's vehicular combat. Nope, Twisted Metal is very, well metal, a gore-soaked80s album cover of a game with screeching guitars on the soundtrack.

I was always more into indie and disco, myself, but there's no accounting for taste.

Musical preferences aside, Twisted Metal is the latest incarnation of a long-running vehicular combat franchise. I hadn't played any of the earlier games, but that didn't seem to be a problem, as initial protagonist Sweet Tooth (a murderous clown with his head on fire) and the basic premise (Satanic presence organises murderous car battles with the winner getting their darkest wishes granted) is introduced afresh as the game opens.

What this introduction has in clarity, it lacks in taste and, well, anything else. The ghastly opening cinematic pans across a dead girl in the road, Sweet Tooth regarding the murdered girl as trash to be thrown aside.

Yes, Sweet Tooth is a murderer and not a hero as such, but all the same it's a gleefully misogynistic opening that dwells on its unpleasantness without ever being particuarly shocking or interesting.

The cinematic has also been produced as a dreadful live action/CG background hybrid, so it looks cheap and nasty.

Introductions done with, the game throws you straight into the action. At this point its highly advised that you go through the playable tutorial, and try and remember what you're told, as there are no in-game button prompts or opportunities to remind yourself of the complex control system. This can make for a steep learning curve of racing around the initial map, mashing buttons and trying to work out what the hell is going on.

Dwells on its unpleasantness without ever being particuarly shocking or interesting.

It's a chaotic beast of a game then, which is not a criticism as such because that's clearly the point: Twisted Metal throws you out on to the streets in your tooled-up vehicle to face-off against similarly armed opponents, and from then on its screeching tyres, destructible scenery and massive explosions galore.

As I said at the top of this review, if nothing else Twisted Metal is aptly named.

There's a sense of achievement that comes from wrestling some control over a game like this, mastering the weapons at your fingertips and turning them against your opponents. As battles play out against a timer, maximum aggression in the minimum time, without letting your own vehicle get blown to bits in the process, is the order of the day.

Victory can be decided by as slight a detail as deciding when is the best time to nip into the garage to swap a terminally wounded vehicle for a fresh one, and these decisions need to be made while fighting for your life. There's a certain smugness that comes from making the right call while under that pressure, keeping your head while those around you are having their's blown off with missiles.

A loud, irritating chore to play.

For all that sense of accomplishment, and the undoubted technical bombast of its crashes and weaponry, I took little enjoyment from Twisted Metal: it was a loud, irritating chore to play, and managed to be too fiddly to even fall into the 'dumb but fun' category.

And on that note, I'm off to listen to some Lucky Soul and forget all about it.

You can support Mark by buying Twisted Metal