Another Code R: A Journey into Lost Memories Wii Review

Another Code R: A Journey into Lost Memories Nintendo Wii 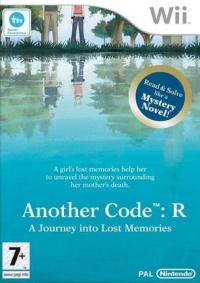 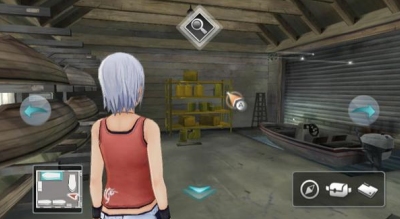 Another Code R: A Journey into Lost Memories Wii is a beautifully tedious adventure game. While the execution of the game is gorgeous, that gloss can't disguise a fundamentally dull and aimless story.

Another Code: Two Memories was a bit of a cult hit. A stylish, all-ages adventure game for the DS, its charming story of a lonely girl and a ghost investigating a mysterious island full of old buildings and traditional puzzles won a lot of fans.

That developer Cing went on to produce the even more acclaimed Hotel Dusk raised high hopes for their Wii debut, a sequel to Another Code.

Another Code R is set two years after the DS game, and heroine Ashley Mizuki-Robins is a little older, but still endearingly naive.

The sequel opens quite promisingly: Ashley's estranged scientist father, who she was reunited in the first game, has swanned off again on another long research project, but invites her to stay with him at a resort called Lake Juliet. Ashley, sore from being abandoned by her father once again, is reluctant, but goes anyway.

The opening sequence impressed me. Although the use of on-screen text without voice-acting for dialogue seems a bit cheap for a home console, the 2D art of the first game has been turned into charming cel-shaded, motion captured 3D for the Wii. The results are absolutely beautiful, a stylish cut scene giving way to the tranquil world of Lake Juliet. The music is suitably ambient, catchy without ever getting too annoying, a miracle considering how long it loops for.

Unfortunately, things went rapidly downhill as I continued to play. Although Lake Juliet is a resort you would genuinely like to visit, a sun-kissed oasis of lush greens and picturesque vistas, there's little of interest to do, and what you can do is ridiculously proscribed.

This block-headed linearity hit me time and time again.

Exploration is slow, examining objects throws up dull infotext of the 'There is a box. It is heavy.' variety, and conversations are long and full of unrewarding, po-faced dialogue. The most interesting things Ashley does in the first hour of game play are prepare a barbecue and recycle some empty pop cans.

Eventually, a number of mysteries arise, some related to Ashley's memories of her late mother (a hangover from the first game's story) and others related to the people staying around Lake Juliet. There's a pollution scandal, a little boy looking for his father, and hints of something nasty happening at the clock tower.

There are fun moments solving puzzles as Ashley investigates these mysteries, and some clever uses of the Wii-mote, but any sense of threat is dampened as soon as it arises. Although the game occasionally suggests there's some time pressure, fifteen hours of my playtime in Another Code R was spent in the same sunny afternoon, and Ashley is never really threatened.

Even worse, Ashley and friends frequently abandon their family crises - all relating to missing or deceased parents - to complete trivial tasks like finding a lost guitar pick or going to fetch a burger.

I couldn't bypass these sideshows either - Ashley will only work on the problem at hand, and won't even pick up an object until the precise point in the plot she decides she needs it.

While the uses of the Wii-mote are clever, they also frequently overestimate the sensitivity of the controller

At one point I needed to retrieve an out-of-reach object, and went straight to pick up a fishing rod lying by a desk - but I couldn't pick up the obviously-problem-solving-rod until I'd gone through an earlier attempt to reach the distant item. This block-headed linearity hit me time and time again, and is especially irritating when object pick-ups and navigation take far more time than they should, with no fast travel between locations and a series of screens to go through to interact with objects.

It doesn't help that most of the puzzles are either bloody-mindedly obtuse (I had to look at a walk through an astonishing number of times for such a supposedly straightforward game) or ridiculously obvious to everyone but Ashley, who takes ages to get to the point.

While the uses of the Wii-mote are clever, they also frequently overestimate the sensitivity of the controller, and I spent more time on some puzzles trying to get the controller to do what I wanted than I did figuring out the solution.

Eventually the plot picks up some momentum and there's a genuine sense of threat towards the end, but sadly the story moves in a direction that I found disappointing - all the plot threads introduced in Another Code R are abandoned and truncated in favour of focusing on the murder of Ashley's mother, an event well worked-over in the previous game.

While we learn more about those events here, it all seems like unnecessary elaboration to a previously resolved mystery, and is no compensation for the plot threads which are built up throughout the course of this game and then left unanswered. Another Code R draws us into a number of different mysteries in the course of the game, and abandons most of them with a brisk suggestion that Ashley might follow them up next time she's in Lake Juliet.

Another Code R is superb, and I would absolutely love to see a Professor Layton type game done with this level of graphical gloss and smart interface.

Ashley is never going back to Lake Juliet (if Cing intended a sequel, any such plan was crushed when the studio folded shortly after the Japanese release of Last Window, subsequently distributed in the west by Nintendo), and even if she was it's a shoddy trick to play. After nearly twenty hours of game play, I was left disappointed that most of the storylines I had painstakingly worked through were left open-ended.

As a technical exercise in how to do an adventure game on the Wii, Another Code R is superb, and I would absolutely love to see a Professor Layton or Ace Attorney type game done with this level of graphical gloss and smart interface. Unfortunately, the story at its heart is unsatisfying, turgidly told with numerous loose ends and pages of ponderous, witless dialogue.

For fans of the original Another Code, of Cing's other cult favourites, and of story-based adventure games in general, Another Code R is a crushing disappointment.

You can support Mark by buying Another Code R: A Journey into Lost Memories