Back to the Future The Game Wii Review

Back to the Future The Game Nintendo Wii 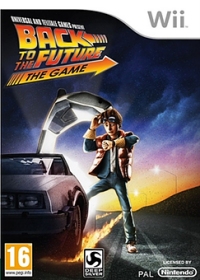 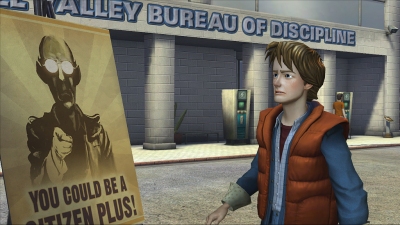 Back to the Future: The Game is a great continuation of the film series and a must for graphic adventure fans, only slgihtly let down by a shoddy conversion to Wii.

Here's a licensed game that's taken a long time to arrive, but I wasn't exactly waiting for. The original Back to the Future was one of those movies I loved when I was ten, and watched repeatedly in the following few years, that age where you have the time and autonomy to watch the same films again and again.

However, while I enjoyed the two sequels (and even saw a bit of the short-lived and largely unloved Back to the Future animated series) I haven't watched or thought about it much since moving into my mid-teens, and a preference for violent, bloodier movies.

So, even though I'd seen the odd news story and preview about Telltale's Back to the Future game, playing it for the first time was a sudden reconnection to a world and characters very familiar from my childhood.

That Back to the Future: The Game (BTTF from now on) is a 21st century game where the 'present' is 1986, picking up a few months after Marty McFly's return to 1985 at the end of the third film, compounds that weirdness. It's like a modern console game, with all the graphical and audio clout that we now take for granted, that's intended for my ten year old self.

Of course, when I was ten years old 8-bit computer games were the state of the art, so a game like this would have blown my tiny pre-pubescent mind. It makes me kind of sad that I couldn't have had this game back then, when I would have really appreciated it.

As it stands, after shaking off the initial glow of nostalgia at reconnecting with Marty McFly and his world, I found the opening section of BTTF's first chapter (the Wii release compiles five chapters released as episodic downloads for PS3 and PC a while back) a bit dull and slow-moving. The initial section is domestic and exploratory, as Marty chats to his dad, mooches around Doc Brown's old house, and tries to prevent downtrodden former-bully Biff Tannen getting his hands on Doc's precious notebook.

There's a lot of chat to get through before the plot really gripped me.

Even when, following the appearance of the famous DeLorean and a bit more faffing around in the present, Marty takes a trip back in time to 1931 to bust Doc out of jail, there's a lot of chat to get through before the plot really gripped me.

While having such a slow opening isn't a positive quality in itself, it is a symptom of a very very good thing - that this is a proper graphic adventure, rooted in dialogue and interaction rather than fast action. Unlike Telltale's more recent game The Walking Dead, which was (zombies aside) more realistic in the interactions you could have with the environment, BTTF allows itself to have the kind of contrived object-combining head-scratchers that the graphic adventure genre is famous (and sometimes notorious) for.

That steady pace also fits with the films that the game sequelises, which always relied on gentle humour, strong characterisation and whimsical nostalgia more than action set-pieces, although those were present too.

The game probably peaks with Episode 3: Citizen Brown, which posits an elaborately melancholy alternate timeline which brings out new sides to old characters, but continues to be great fun all the way to the end -- delivering new twists right up to a final scene that rings absolutely true to the films and their ethos.

How much of this authenticity is down to the fanboyism of the writers of the game, and how much down to the presence of screenwriter Bob Gale as a Story Consultant I don't know, but it makes for a game that feels like a real narrative journey that grows the characters while retaining integrity to the source material. A worthy sequel to the films, basically.

A real narrative journey that grows characters while retaining integrity to the source material.

Thinking about the storytelling of Back to the Future in detail, something I was incapable of doing as a child and haven't had any reason to do so as an adult until the game came along, gave me a great appreciation for just how tight the Back to the Future concept is, and what an excellent job Telltale do in working within such precisely defined narrative parameters.

In broadening Back to the Future from a standalone movie into a trilogy, writer Gale and director Robert Zemeckis may have expanded their canvas into a fluctuating future and the old wild west, but they also screwed down the Back to the Future concept pretty tightly.

Through in-jokes, repetitions and callbacks, the sequels make clear that the series is very much focussed on the town of Hill Valley and the geneology of various families who live there, including the heroic McFlys and the villainous Tannens. The historic elements all carry a weight of nostalgic Americana, while the futuristic SF elements of the stories are broad, humourous and pulpy.

Telltale don't just work within these restrictions, they thrive, bringing in a caricature 1930s setting that's as evocative as either the 1950s of the first film or the wild west of the third, while also digging deep into the personal history of Doc Brown as well as members of the McFly, Tannen and Strickland families. It makes for a game that's an inventive extension of the series, building on what has gone before without straying off course by, say, taking Marty to Arthurian times or landing him on the Moon.

Telltale don't just work within these restrictions, they thrive.

So, the storytelling is strong and entertaining, and the puzzle-based gameplay is fun and engaging without being overly obtuse - and there's a built in hint system to avoid massive frustration if you do get stuck.

Technically, the game is a bit less consistent.

The stylised visuals are lovely, capturing the actors in expressive, cartoony form and retaining the Californian sunniness of the movies. Superb voice acting compliments great animation: Christopher Lloyd returns as Doc, while AJ LoCascio does an excellent impersonation of a mid-1980s Michael J Fox as Marty. The supporting characters voices, if not exact soundalikes to the movie actors, capture the essence of their characters.

Having Claudia Wells return to voice Jennifer fits nicely with the game's approach to her character, which goes some way to redressing her sidelining in the film sequels. The use of Alan Silvestri's score is appreciated and evocative, although lingering in any one scene for too long - say, while wrestling with a tricky puzzle - can lead to infuriation with too tightly looped background music.

In other areas the game is less impressive. While the technical aspects of the game are well within the Wii's capabilities, the transition from episodic download to single disc has been handled roughly. In particular the game has not so much been optimised to run off a disc rather than a harddrive as pessimised, with constant judders and long loading times not just between scenes, but whenever the in-game camera cuts from one angle to another.

These constant delays make the game feel slower than it is, and staring at a loading screen repeatedly and for long stretches really harms the pace and hampers enjoyment. Surely we shouldn't be having these problems in 2012, especially with a game that's hardly pushing the technological envelope?

Telltale don't just work within these restrictions, they thrive.

Other issues are minor but irritating: rather than properly link the episodes within an overall menu and save system, each episode is entered individually through separate but identical menu screens, which is just confusing. The manual save is tucked away in a weird corner of the loading and saving menu, and, on my review disc at least, the special features referred to on the game's box weren't actually on the disc, or at least not anywhere I could find them.

Back to the Future: The Game comes highly recommended, for both fans of the films and anyone looking for a strong narrative adventure game. However, the Wii conversion doesn't do the game justice, so if possible consider getting the PS3 or PC version instead.