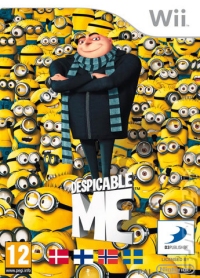 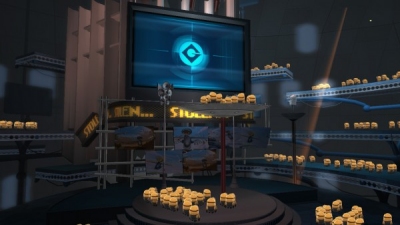 Despicable Me Wii puts the player into the role of villain rather than hero, but the real criminal here is the bland and frustrating gameplay.

I haven't seen the Despicable Me movie, but the high concept is easy enough to grasp: as opposed to focussing on a hero, it's a story about a villain. Not just any villain, but a supervillain, Gru, with the secret lair, dastardly schemes and subservient minions befitting a megalomaniacal wannabe tyrant.

Gru's latest scheme is appropriately over-the-top: to steal the moon. To do this he needs to build a rocket, and each of the game's missions sees Gru trying to steal a different rocket component.

It's a straightforward plot, but a nice idea for both a story and a game. Gru and his fellow villains sit somewhere between the (relatively) realistic 60s Bond villains and the more fantastical supervillainy of Marvel Comics: Gru himself is pretty much Bond's nemesis Blofeld with a scarf, while his genetically engineered minions are cute variations on the Mole Men from the Fantastic Four comics, adorable yellow blobs in boiler suits.

The Fantastic Four and the early James Bond movies were of course massive influences on Brad Bird's movie The Incredibles, and Despicable Me feels like a rougher companion piece to that film: the designs are looser and less charismatic, but there's a similar early sixties feel to the characters and environments. It's a world where villain's secret bases are designed with sleek modernist simplicity. The soundtrack reinforces the sixties espionage mood.

It's a world where villain's secret bases are designed with sleek modernist simplicity.

Despicable Me looks and sounds the part, with good character animation and voice acting, but underneath that surface it's less inspiring. There's a core of interesting gameplay, but it's buried beneath too many layers of generic and uninspired play.

The interesting part are the puzzle sections, where Gru needs to use his minions to progress through trap-filled rooms. Unlike Lemmings or Worms, minions don't actually do anything on their own: instead they need to be carefully placed either alone or in formation, then manipulated with one of Gru's weapons. These are simple puzzles of combination, essentially - e.g. using the freeze ray on a minion to turn it into a heavy block of ice, depressing a button - but they do require some thinking, and make for pleasant puzzling play.

Unfortunately the puzzles are a small part of the game: most of the rest is given over to side-scrolling platforming, with Gru evading hazards and manipulating the environment with his weapons: freezing moving platforms in place, moving metal objects with a magnet, and so forth.

These sections are competent enough, and refreshingly challenging for a tie-in game to a kids' film, but are let down by the control scheme: the stick on the nunchuk is just too loose for precision platforming, especially when used to direct a weapon at the same time. Far too often I'd aim the gun downwards to freeze a red-hot platform, only to shuffle off the edge of the platform I was standing on instead. Trying to execute a complex manouevre can be a frustrating experience.

Despicable Me has some cute details around the periphery.

After a certain amount of fails the game offers up the option to use a Despicable Cheat, skipping to the next section. I found myself deliberately running into spikes on some particularly annoying sections, as it was fairly obvious I wasn't going to get anywhere and wanted to just leap ahead.

While the option to bypass a difficult section and see the rest of the game is a welcome one, it shouldn't be more fun than actually playing the game. Platforming games rely on fluidity of movement and responsive controls to be fun: the player needs to know that any failure is the fault of their poor play, not the game. Despicable Me's platforming feels messy, clunky. No fun.

The less said about the plane-flight sections of the game, the better, so I'll say nothing.

Despicable Me has some cute details around the periphery: opportunities to deface artworks or harass a rival's henchmen, a villainy that's closer to naughtiness than anything else. There are collectibles and unlockables. But aside from those puzzle sections, most of the gameplay is a drag, and no amount of retro styling or bonus material can alleviate that.

Throughout the game, Gru responds to player failings with snarky comments. At one point he asks, despairingly, how many levels there are left to go?

You can support Mark by buying Despicable Me