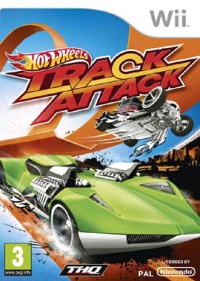 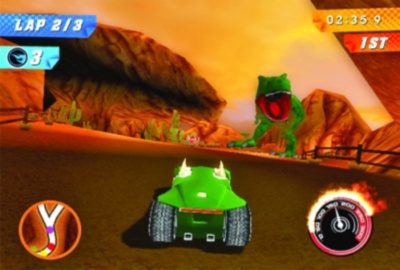 Any sufficiently popular toy range will inevitably move into other media, including videogames, regardless of how appropriate they are to that transition. At the most absurd edge of this phenomenon, someone once tried to make a Saturday morning cartoon about a Rubiks Cube, just because the puzzle toy was hugely popular at the time.

Taking the Hot Wheels toy car range into videogames isn't quite as absurd as making a cartoon about a talking magic Rubiks Cube, but neither is it the comfortable fit that a 'toy cars = racing game' formula makes it seem.

At heart, Track Attack is exactly the game you would expect: a straight-forward arcade racer featuring the kind of souped-up, cartoonish vehicles found in the toy range. It's brightly coloured, bold and clearly aimed at relatively young gamers, with simple controls and not too much of a challenge.

There's no frills or supporting narrative to the action, which is slightly off-putting but fits with the idea that the game as a playbox of virtual toy cars. Track Attack doesn't welcome you in, but rather throws options in your face.

And there are plenty of options, with a plentiful supply of game types, cars and customisation options. The environments are less enticing, with four generic areas to race in: a tropical beach, a rain forest, a desert and a post-apocalyptic city which has the odd alien in the background, but otherwise looks more like a run-down dump than the atmospheric wastes of Fallout.

Pick a car, fiddle with the colours, and head into the first environment and you're thrown straight into the race, with no tutorial, story introduction or cut scene other than a pan-across the cars. There are no visible drivers, or anything living: Hot Wheels is cars cars cars, and that's it.

Does that mean they're supposed to be actual toys in-game? Well, the environments aren't toy-sized like in the much-loved Micro Machines games, although they are cartoonishly unreal with surreal touches like the aforementioned aliens, or a T-Rex crossing the track. Is the Hot Wheels world a cartoon land based around racing, or a super-detailed toy room? It's hard to tell.

Isn't quite as absurd as making a cartoon about a talking magic Rubiks Cube.

This uncertainty of purpose applies to the racing gameplay itself, which falls uncomfortably between straightforward classic arcade racers like Out Run, and the wackier, sillier fun of Mario Kart and its clones. Track Attack's combination of serious-faced, muscular cars and sharks bouncing over the road feels disjointed.

In spite of these reservations, Hot Wheels: Track Attack's racing handles well, albeit simplistically, and in many ways is a throwback to the simpler arcade racing of an earlier era, before Gran Turismo or even Test Drive raised the level of realism and simulation.

One way in which Track Attack tries to play with the big boys of racing games is the number of options. In terms of gameplay there are three tracks for each of the four environments, and five types of race for each, making for a total of sixty individual rounds in the single player game.

That's not bad value, albeit repetitive, especially as the variety in game types is not as deep as it seems: Race is the basic racing mode, while Elimination is the same but with the last racer knocked out after every lap. Hot Lap is against the clock, Checkpoint is a slalom weaving to hit targets on the track, while Token Grab isn't really a race at all, just a timed chance to grab the in-game tokens needed to upgrade cars.

There are plenty of cars to upgrade, but to be honest I've never been terribly interested in different kinds of car, so I picked one I liked, turned it bright pink and boosted its stats. After that point the tokens just piled up unused. The more motor-minded may enjoy tinkering with the various types of cars.

Unpretentious cartoon racing with no frills or narrative.

There are some interestingly extreme cars to unlock, and theoretically you see them in-race before you unlock them, but as the game is fairly easy you won't see much of, say, the car that looks a bit like a shark, as it'll be eating your dust with all the other opposition. I'm fairly bad at racing games, but managed to get Gold or Silver in most of the rounds on my first go.

There's also a track creation tool, for further digging into the game's possibilities, and a trophy system to reward the gradual completion of the game.

The depth of customisation just adds to Track Attack's disjointed feel, as it's hard to imagine anyone who enjoys tinkering with cars to this extent equally appreciating such straightforward arcade racing. Nonetheless, if you want a lot of unpretentious cartoon racing with no frills or narrative, but a lot of secondary toys to play with, Track Attack might be for you.

You can support Mark by buying Hot Wheels Track Attack