Night at the Museum 2 Wii Review

Night at the Museum 2 Nintendo Wii 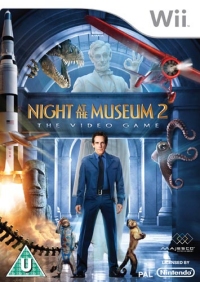 Night at the Museum 2 Wii is an inoffensive fantasy action romp that is suitably cinematic in places, but lacks the flavour or humour to really bring it to life.

Ben Stiller's Night at the Museum films are, I gather (I haven't seen them), family-friendly comedy blockbusters. It's not really a natural genre to transfers to games, to be honest: sight gags and celebrity cameos don't really transfer well to stilted cut-scenes animated in a faux-Pixar style.

My lack of foreknowledge of the films wasn't really a problem, as on taking on the role of Larry I was pretty much told what to do every couple of seconds throughout the game. It's a very simple exploration-based adventure, with plenty of pick-ups and collectibles, well-suited to the Wii - especially when I used Larry's magic torch, which can be waved with the wiimote.

Wandering around finding all the pick-ups tickled the obsessive-compulsive streak in my gamer-brain well enough, but my enthusiasm was dampened by the game's constant insistence on nagging me to get back on track, with constant dialogue and text prompts telling me what to do next. It felt like Night in the Museum 2 was so desperate to avoid me failing or getting lost, that it didn't leave any room for me to actually think.

From a story perspective, Night at the Museum 2 didn't give me much to chew on.

That's not to say the game is entirely unchallenging - I was told what to do, but sometimes these instructions were unhelpful or ambiguous, and the options for the magic torch, while clearly explained, could be surprisingly complex to use. Occasionally, the game is bafflingly difficult and obtuse.

From a story perspective, Night at the Museum 2 didn't give me much to chew on. It's clear from the game how the film works - a series of splashy action set-pieces and rapid gags, with colourful characters and a loose, magic-based plot that strings all those bits together.

That's enough for a couple of lightweight hours at the cinema, but it's pretty thin gruel for a videogame that expects you to spend hours with these characters. Yes, most game stories are simplistic, and often daft, but they're strong on motivation, giving the player a reason and an excuse for play. Night at the Museum 2, on the other hand, just drifts between one random thing and another.

This game is a passable distraction, but it's too shallow to be really involving - the jokes aren't funny enough, the characters are caricatures, the dialogue floats along inoffensively, and the game is peppered with historic and scientific 'factoids', sugar-coated bits of trivia that give the game an educational gloss while never accumulating into knowledge.

The jokes aren't funny enough, the characters are caricatures, the dialogue floats along inoffensively.

Night at the Museum 2 may very well work for the converted - if you like the films, you can encounter familiar characters in the game, and play around with Larry's magic torch and keyring.

For fans, that may be enough. As a newcomer to the property, I didn't find much to recommend Larry and his innocuously banal adventures.

Not my idea of a magic time.

You can support Mark by buying Night at the Museum 2