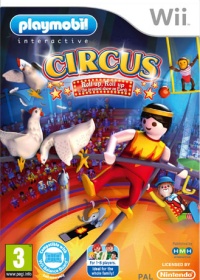 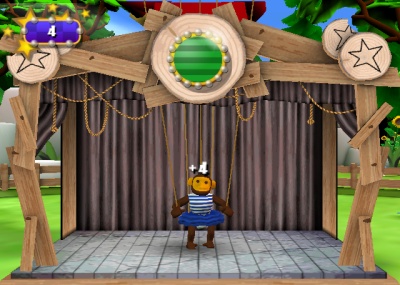 Does anyone dream of running away to join the circus any more? Come to think of it, did they ever?

Well, if you cherish the stereotypical and archaic fantasy of fleeing your home in favour of the itinerant life of a travelling performer, then Playmobil Circus probably won't compensate for having become an IT specialist instead, but may still provide some brief amusement.

Germany's Playmobil toys have never been as popular or beloved as Lego, but they've been around for over 35 years so it's not surprising that this bold plastic world of smiley people and themed environments has transferred to videogames.

(In one respect Playmobil's lesser popularity is an advantage - Playmobil Circus feels less self-satisfied than the Lego games, less inclined to rather smugly rest on the charms of their minifigs.)

Playmobil Circus opens rather sweetly with a cutscene showing the Circus coming to town, watched by a Playmobil boy and a girl from the roadside. It's a surprisingly well done sequence, capturing an idealised version of the scenario right down to the endless blue skies above. Circuses have a bit of a dubious reputation these days, especially for their treatment of captive animals, but the Playmobil version of a circus is an idyll of dancing monkeys and happy elephants, rather than the grimmer reality.

The game proper is a mini-game selection, where each game is a circus act on which you are scored. Mastering enough acts allows you to perform them for real in the big top, with high scores there opening up more acts/games to try. There are opening animations both for the practising acts in Circus School, then between each act during the shows themselves. These have the same clean, appealing presentation as the initial cutscene, but are thankfully skippable.

If you cherish the stereotypical and archaic fantasy of fleeing your home in favour of the itinerant life.

The acts themselves are all RSI inducing minigames utilising the wiimote, the nunchuk and even sometimes the Wii balance board, if you have one. There's nothing very complicated, but the vagaries of Wii-mote control can be a challenge and lead to some controller-flinging frustration.

Most enjoyable are the rhythm action games: getting a puppet monkey to do the can-can is great fun, as is using the Wii-mote to conduct a band. There's also silly fun to be had in tossing a cow up into the sky using a trampoline, or catapulting chickens into a tower using an elephant. The Playmobil animals may be featureless lumps of plastic, but they're well animated and their plasticky crudity is quite appealing.

Some games feel a bit too simple: lion taming is a matter of pulling the wiimote away on cue, while elephant skipping just involves pointing up and down. The more simplistic a game, of course, the more irritating it is to fail due to a sluggish reaction to the Wii-mote, but seasoned Wii minigame players will be entirely used to compensating for the control system's idiosyncracies.

The Playmobil people burble away in simlish-style gibberish.

As a minigame collection, this is a bit thin but generally enjoyable. There are not that many games, but a lot of them are quite fun and the circus career structure at least gives some small amount of narrative shape to the experience. If you just want to breeze through the game trying everything then it won't take up much of your time, but beating the higher scores laid down by the mysterious Clown X should at least require some commitment and teeth-gritting repetition.

It's all a bit cheap and cheerful, to be honest, but relatively endearing as these things go, with peppy music and nice clean presentation. The Playmobil people burble away in simlish-style gibberish, while their world is incredibly colourful and happy. Playmobil Circus isn't a brilliant game, but it is a very likable one, and if you want a load of simple minigame distractions to play then you'll find this a well-structured collection.

You can support Mark by buying Playmobil Circus