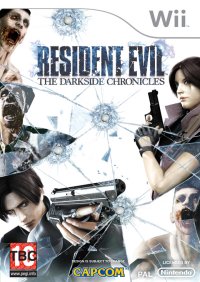 Resident Evil The Darkside Chronicles for Wii is a straightforward shooter that slickly revisits some of the series' highpoints, but which lacks the narrative depth of a core Resident Evil game.

Other series take what might be described as a 'mythic' approach, telling one story again and again with different trappings: both Link and Mario find themselves rescuing the same princesses in different settings.

Which leaves the Resident Evil franchise as an oddity, a hybrid that not only has an ongoing story that runs through the main series of games (Resident Evils 0-5, with Code Veronica right in the middle), but it also has spin-offs that go back and re-tell earlier episodes in different game types, or from different angles.

The Darkside Chronicles is the latest spin-off. Like its predecessor, The Umbrella Chronicles, it's an 'on-rails' shooter for the Wii, where you have no control over your movement and the only real strategy comes in terms of choosing which weapon to use.

Darkside Chronicles retells previous games in the main series, and also fills in some new bits of Resident Evil history.

The Nintendo Wii control system, especially when combined with the Zapper or similar gun accessory, is particularly good for this type of game, as you can point and shoot with the wiimote to a great degree of accuracy. The result is fun, frantic but undemanding shooting. It's the fairground ride version of Resident Evil, and as rides go I enjoyed it.

Like The Umbrella Chronicles, the Darkside Chronicles retells previous games in the main series, and also fills in some new bits of Resident Evil history. Umbrella Chronicles covered the events of games zero, one, and three, concentrating on the characters of Chris and Jill.

Darkside Chronicles cobbles together a story from what's left, namely the Resident Evil 2 and Resident Evil: Code Veronica, the ones starring Leon and Claire. These flashbacks are framed by a new story set in 2002, showing us some of Leon's government career between Resident Evils 2 and 4, and his first mission with Krauser, another character from part four.

It may sound like overheated fan-fiction, but this convoluted plot works surprisingly well. The plots of the Resident Evil games may be extremely stupid and nonsensical, but they're full of great locations and striking images.

Darkside Chronicles is certainly a fun way of revisiting some favourite moments from the series with modern graphics and decent voice acting. I really enjoyed seeing the Raccoon City Police Department, Chief Irons and the demented Ashford twins again, without taking the time out to properly replay the original games, which frankly were a lot harder to play than this.

By moving from one game type to another, it cannot help but change the storylines it tries to faithfully recreate.

The twist in Darkside Chronicles' slavish devotion to Resident Evil continuity is that, by moving from one game type to another, it cannot help but change the storylines it tries to faithfully recreate.

The main Resident Evil games are complex, fiddly games full of exploration, hidden passageways and constant back-tracking. Darkside Chronicles flattens them into straightforward runarounds, and ignores any puzzle elements from the original games. Suspense is replaced with a barrage of action, and bad guys are a lot easier.

More fundamentally, Darkside Chronicles includes a partner character through ever level, whereas the original games were resolutely single-player. This radically changes the atmosphere: whereas early Resident Evils involved quiet, lonely exploration punctuated by sudden shocks, in Darkside Chronicles the two characters constantly natter to each other, breaking any sombre mood.

Time to come up with something new, or get off the stage.

While Darkside Chronicles provides some dumb shooting fun, I'm not sure who it's for. I don't think there are that many newcomers to the Resident Evil series desperate to play a dumbed down version of earlier titles they missed, while long term fans like myself will be left unsatisfied by this flashy but insubstantial retelling of fond gaming memories.

As it stands, Darkside Chronicles represents the Resident Evil series just repeating old tricks. Time to come up with something new, or get off the stage.

You can support Mark by buying Resident Evil The Darkside Chronicles