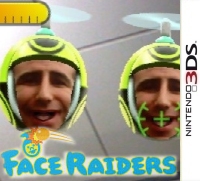 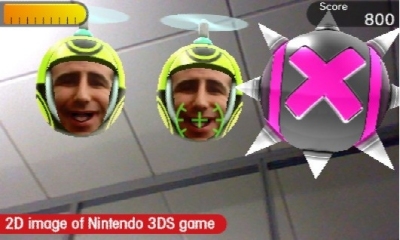 Face Raiders is knit into the fabric of the 3DS for good reason. It's a compact package that introduces all the key features of Nintendo's 3D handheld.

Face Raiders is a simple, one-button shoot-em-up for the Nintendo 3DS. It's pre-installed on the console so everyone gets it for free. Judged from a regular perspective it seems entirely unremarkable, a tech demo to prove the viability of the 3DS augmented reality features.

However Face Raiders is a fascinating concept that matches the 3DS system perfectly and deserves more than just a fleeting glance before you pop in a game cartridge.

You see, Face Raiders has the arduous task of showcasing the talents of the 3DS. All of them. And in that respect, this simple target shooting game manages to embarrass most full priced games. It was developed in-house by Nintendo's Kyoto studio and if any company knows how to squeeze the most out of their own system, it's them.

The marvel here is that within a minute it showcases all the 3DS features without tripping up over complicated controls, long cut scenes or a convoluted plot.

Let's start with the obvious one: 3D. I've played a couple of games since I bought my 3DS that have struggled with the systems main selling point. The 3D slider on the side of the console should, in my opinion, be set to a comfortable level and then be left alone. But with Street Fighter IV and Steel Diver I found that I had to constantly tweak the slider which became a jarring component of play. The 3D level was often uncomfortable, intrusive or in some cases, barely existent. Face Raiders, however, pitches 3D perfectly. Possibly due to the short and frantic nature of the gameplay, I had neither the time nor the inclination to nudge the 3D level up or down.

Showcases all the 3DS features without tripping over complicated controls, long cut scenes or a convoluted plot.

Then there are the gyroscopic controls (ed: motion controls to the rest of us). Straight out of the gate these are showcased perfectly in Face Raiders. The target reticule on the screen is fixed, and movement from target to target can only be accomplished by moving the 3DS. In Zelda: Ocarina of Time these are used to aim your projectile weapons. The viewpoint of the game switches to first-person and aiming can be accomplished using either the thumb-stick or by using the 3DS's built in gyroscope. Simply moving the console up, down, left or right the scene displayed on the screen shifts accordingly. It's almost like looking through a magic window into another world, and you can view it as freely as if it were the world you know.

Next there is the 3DS's touch screen. This offers another way to fire on the enemy, although by now we are all used to this option so I won't dwell here (and anyway it's easier to fire using the A button).

The two cameras on the front of the 3DS are used by Face Raiders to bring the action into your living room, bedroom, bathroom, or wherever you happen to be while playing. This Augmented Reality enables the enemies to live in and around your surroundings by blowing holes in your wall or warping your floor. It's especially effective in a well-lit, average sized room which enables the game to recognise the real life borders that surround the console and to Augment special effects onto them. No other game can, almost literally, tear your bedroom door from its hinges, unveiling a starry cosmos that, last time you looked, was just the top of the stairs.

Finally, Face Raiders uses the 3DS camera to pull the old your-face-in-the-game routine, which has been around and in use in home consoles since the PlayStation 2 Eye Toy debuted in 2003. Using the 3DS's inner camera a facial snapshot of the player is taken and the resulting mug-shot is rendered 3D and squeezed into an armoured, flying helmet. This disembodied invader, and dozens more just like it, infringe on your personal space in waves. Shoot ‘em down.

Perhaps the only aspect of the 3DS that Face Raiders reneges on is the more powerful visuals. This is a shame as it's the most misunderstood aspect of the 3DS, with plenty of parents decrying their need for a 3D DS when they already have plenty of normal DS's in the house.

Face Raiders ticks all the 3DS boxes in the first few moments of play.

The worth of Face Raiders cannot be counted in coins or bank-notes, it is a free game but certainly not worthless. With the attraction of the titular 3D effect now waning in the public's cautiousness, Face Raiders seems more important than ever to communicate the real value of the 3DS.

New technology can often be a hard sell. People need to see it with their own eyes before they get it. Face Raiders flashes its best salesman smile, and with its accessibility and personalised nature, jams its foot in the door and refuses to leave until you have seen all it has to offer.

It doesn't take long. Face Raiders ticks all the 3DS boxes in the first few moments of play and, at the moment, is in a league of its own.

You can support Kelsey by buying Face Raiders