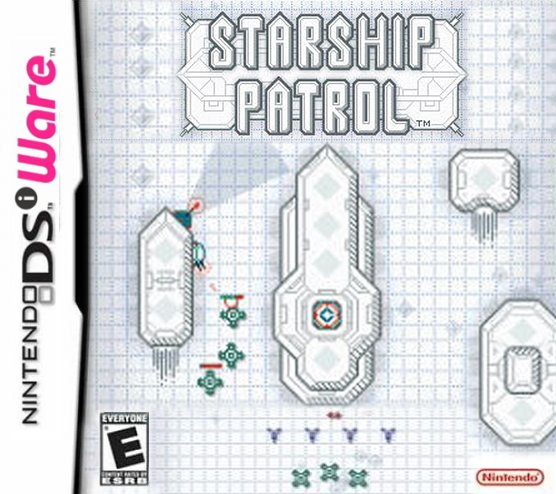 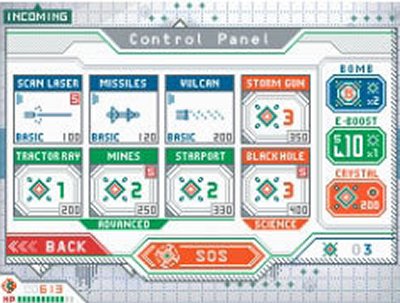 Starship Patrol transcends its low-fi appearance and genre stable-mates to provide an educational strategy experience which is deep and challenging, while at the same time quick-paced and entertaining.

I think Starship Patrol (Starship Defense in the states) appeals to me because it has taken the concept of epic space battles (which is nearly an automatic sell for me!) and wrapped it around the Tower Defence genre. Tower Defence is quite a broad church, I think, defined more by the differences between titles and the subtle changes to mechanics and rules than it is by the common thread: eliminate a series of enemies before they leave the screen.

I was initially put off by Starship Patrol's visuals. At first, it looks a little like the graph-paper doodling of a bored schoolboy: Like drawings in the back of an exercise book. Initially I thought I would have preferred a more high-definition battlefield, with proper sci-fi ships and vistas.

However, as the game progressed it became clear that the clear black-on-white display is essential to and complements the gameplay. As multiple waves of enemies filled the screen and my eyes were challenged to differentiate between bullets, power-ups and upgrades I realised that a fully rendered sci-fi scene would be much harder to follow.

The game does well to use its star-fleet setting to provide a little bit of story motivation and add variety to the levels. There is even a branching path through the various maps which even provides a small amount of non-linearity to progression. Additional weapons (and therefore strategies) are unlocked as the game progresses and it was once the game had provided me with a wider variety of tools to deploy that I found it at its most engrossing and satisfying. Like any player, I learn best when I can develop my own strategy and see how well this works against the enemy.

It looks a little like the graph-paper doodling of a bored schoolboy.

For me the game was at its worst when the missions were too prescriptive in design. A few of the missions in Starship Patrol actually seemed to require a quite specific set of elements to be combined. This seemed to me to change the game from a broad strategy simulation to a much more Lemmings-style puzzler (a genre for which I am a little embarrassed to confess I have very little patience). It's interesting to me how a simple change to the rules could so colour my enjoyment of playing. I found that having to restart over and over again and then repeat the specific deployment of established weapon sets I knew to be effective against the first few waves to be a bit of a chore and far less satisfying.

I also found the cost of removing weaponry to be prohibitive. Perhaps this is a deliberate design choice, but I think I would have enjoyed some missions more if I'd had more ability to change the defensive strategy as the level developed.

My only other gripe was that the effect of some of the power-ups (which enhance the Range, Speed or Power of particular units) on certain weapons seemed unclear. It would have been nice to have a glossary or indicator somewhere in-game to clarify these. Does boosting the speed of the Gatling gun achieve anything? What actually happens when you boost the range of the mine-layer?

I learn best when I can develop my own strategy.

Nevertheless, Starship Patrol is a great game. It overcomes any pacing problems usually associated with Tower Defence games and at times almost feels like an action shooter. I found it very satisfying watching my own strategic gambits come to successful fruition on-screen as waves of enemies fall at carefully selected choke-points. This is a rare educational payload where strategy turns into rejoicing.

At 500 points from the DSi shop it's among the comparatively more expensive offerings. In this case, however, what is on offer is quite generous. Starship Patrol has the quality and substance of a full game which could easily have been given a shot as a cartridge release. For the equivalent of about Ł4.50-worth of points, it's a great investment.


You can support Melrose by buying Starship Patrol

"Welcome to my teaching Xbox 360, PS3, Wii, DS lite and PSP game reviews. As well as being a parent of a teenager who is learning languages at school, I'm also fluent in French, and a trained educator myself, so I hope to bring a bit of teacher know how to these educational game reviews."