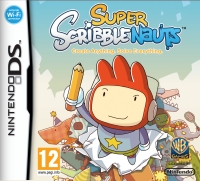 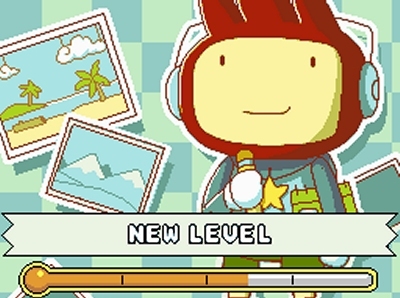 Super Scribblenauts' inventive game play relies as much on the player's imagination and life experience as on its own design. Educationally it's both engaging and unusual in a way that will appeal to Kinesthetic learners.

Super Scribblenauts is a puzzle game where the player's imagination is the only limit to the way they can solve each problem. Rather than using a limited number of tools to resolve each challenge, players can simply conjure any item just by typing it.

The game is clever enough, and equipped with a sufficient dictionary, to interpret pretty much any request from the player into one of its 800 objects. Once created the item appears in the level with its own specific qualities. "Balloons" float, "Ice" melts, "Cars" drive, "Birds" fly and "Terrorists" attack - just as you would expect their real world counterparts.

The clever part, particularly from an educational point of view, is the way Super Scribblenauts gets players to apply these items to a particular scenario. Whether it's a friend who needs to be melted from a block of ice, or children who need rescuing from a cliff, players reach into their imagination and pull out items they think will help.

It's magical to watch the wonderfully inventive ways young minds dream up to solve each of the different scenarios - far more inventive and unusual than anything I could muster.

This was all true for the first Scribblenauts game, but in Super Scribblenauts you can also apply adjectives to your nouns. At first creating "Tiny" or "Red" or "Cold" versions of the different objects seems like a bit of fun, but it is soon put to use in the game.

Particular puzzles need objects of a certain size or with certain properties to solve them. For instance you may need to get a heater to your friend in a cave to warm him up. A normal "Heater" is too big, but a "Tiny Heater" will pass through the small gap to get to him. Or perhaps you could go for something more inventive like a "Flaming Mouse".

It's the way the game seamlessly weaves learning with play that most impressed me.

Super Scribblenauts offers 800 objects and 10,000 adjectives, so there is an almost endless supply of different items players can call on. But more than the impressive game mechanics and head scratching puzzles, it's the way the game seamlessly weaves learning with play that most impressed me.

I spend much of my working day at my Junior school looking to teach kids without making it too teachery. Even at that age, as soon as you start setting things out in a formal classroom fashion there is a portion of the class you simply lose.

These Kinesthetic Learners need to be engaged by something that relates to life in the real world for them to make sense of what it going on. It's what the Montessori approach has been championing for years, and it's what Super Scribblenauts gets spot on.

Vocabulary, agile thinking, problem solving and just plain creativity are all to the fore of the game. But just as much as any of these worthy aspects, Super Scribblenauts is actually a lot of fun. There are not many other learning aids I'm keen to play in the evenings after a long day in the classroom.

Super Scribblenauts works because it hooks into our innate desire to learn and create. On that basis I expect to be playing and working with the game for a long time to come.

You can support Melrose by buying Super Scribblenauts

"Welcome to my teaching Xbox 360, PS3, Wii, DS lite and PSP game reviews. As well as being a parent of a teenager who is learning languages at school, I'm also fluent in French, and a trained educator myself, so I hope to bring a bit of teacher know how to these educational game reviews."