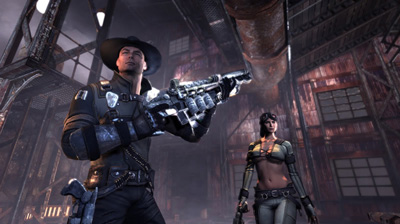 Damnation is a disastrous game that suffers from a multitude of technical issues. Its grim premise of an American Civil War that never ended piqued my interest for a Steampunk Western experience, but the story is told with appalling voice acting and gameplay that was better left back in the 90's. With grotty visuals and awkward shooting mechanics that turned the combat into a joke, every level of this game was a torturous experience I wish I'd left back at the game store.

From the outset I was intrigued by this game. Alternative history books, movies and games have always held a certain mystique over me with their interesting suggestions of how the world might have turned out differently had world events gone differently. Damnation's premise of an American Civil War, extended after an advanced arms manufacturer became involved in the conflict, was certainly enough to get my Western/Steampunk itch scratching again. Initially I was slightly disappointed that it had gone a bit too far towards the Steampunk side things with a conflict that looked more like man versus machine rather than just a straight north/south conflict.

...there were constant frame-rate issues, hideous looking characters and environmental textures and a general lack of polish scattered throughout.

So the premise interested me, as did the prospect of more vertical platforming usually espoused by 3rd person shooters - but Damnation did everything in its power to dilute this concept and turn it into a vacuous hole that poor visuals, janky gameplay and horrendously voice acting resided in.

The opening level was a fantastic example of these problems. Characters spoke with about as much conviction and interest as I had for listening to them, there were constant frame-rate issues, hideous looking characters and environmental textures and a general lack of polish scattered throughout. And this effort - especially with the voice acting - goes all the way through the game with no-one really entering any state of acting and seeming to blithely read what was in front of them.

It felt that way when it came to the gameplay too. No matter if I was shooting, taking rudimentary cover, or attempting some of the much-hyped platforming - it was all barely functional and usually ended up breaking or glitching in an irritating way. Bodies of my enemies would appear in mid-air, sometimes still spewing blood from shots that I wasn't firing - pretty funny considering the firing mechanic meant bullets rarely hit targets even at point blank range.

From there it's hard to see any redeeming features to the game. I found the visuals appalling bland, going for the usual greys and browns of all those typically average shooters that feel mashed together in a short space of time. The idea of a Western-themed Steampunk shooter felt entirely buried under these problems and even the mystical nature of part of the story did nothing to raise my interest.

It's a shame as Damnation's influences are clearly in the Gears of War camp with a little bit of the platforming aspects of Tomb Raider or Uncharted thrown in for no quantifiable reason. It might be unfair to compare Damnation to those games but I found it hard to find any contemporary shooter that has been so badly put together.

But just as I was starting to get into its tale, the game would throw out a broken piece of platforming or an irritating section of combat that made me just want to switch off my console and sit in a darkened room.

The only bright spark that kept me from ripping this monstrosity out of my Xbox 360 and snapping it in two was the story. Even though it was poorly delivered with bland and stereotypical characters, it tried to tell a vaguely interesting tale about the alternate American Civil War the game based itself in. I could see that with greater direction and better production values that the narrative could deliver some worthwhile moments. But just as I was starting to get into its tale, the game would throw out a broken piece of platforming or an irritating section of combat that made me just want to switch off my console and sit in a darkened room. Alone. And cry.

The fact there's a smidgen of potential in this title makes it all the more difficult to play. Just like Shellshock 2 and Darkest of Days, Damnation showed me a brief moment of interest before cruelly destroying the experience with a host of technical problems. There was very little to love whilst I was playing this game and to be honest, I did not have the constitution to make it to the end. I don't recommend that anybody does - in fact I don't recommend anyone even tries this game. It is awful.

You can support Andy by buying Damnation