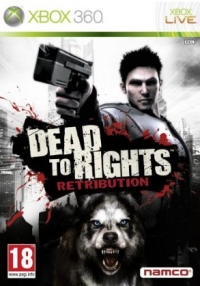 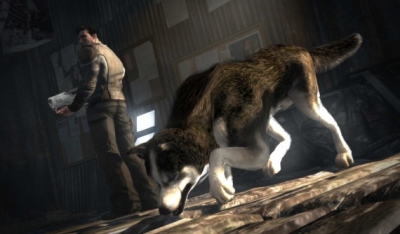 Dead to Rights Retribution endears with its doggie partnership. In the midst of this brash blockbuster of a game runs an quiet partnership of which you play both parts.

I've got something of a soft spot for four footed companions in video games. It's a cheap shot as far as play mechanics go - what better could tug at the heart strings that working with your very own furry sidekick - but when executed well it can create some of the best moments I've found in gaming.

Dead to Rights Retribution is seen by many as a derivative video game, churning out the same juvenile sweary violence we've seen for a long time now. But, beyond the average third person shooter this game digs into a rich vein of gaming partnerships.

That's not saying that Dead to Rights is a one trick pony, there is plenty of slap-happy shooting, running and hiding fun to be had here. Disengage both conscience and age bracket and you can pass a very happy nine or ten hours of head shot joy. The game as a whole doesn't excel, but does what it has to to pass muster.

What shines for me though is Shadow, and how you can switch between controlling him or Jack. From a game design point of view I was intrigued that Namco didn't limit Shadow to an AI controlled non player character. Whereas in Fable 2, Fallout 3 and Shadow Dancer you could only influence your canine friend with a few commands, Dead to Rights takes its queues more from Okami.

I really enjoyed the feeling of protection generated by being the watch dog.

As well as sending Shadow to attack the enemy in scenes that will remind Stand by Me fans of "Sick balls chopper" fears, you can also switch to control him directly. Moments in the game when Jack is down or in danger and you take on the role of Shadow were real Lassie moments for me.

I really enjoyed the feeling of protection generated by being the watch dog. Without a gun, Shadow is of course more vulnerable and must make much better use of cover to get close enough to attack enemies directly. This not only worked in terms of raised tensions but emphasised the use of cover when you were back controlling Jack.

The only doggy missed opportunity here is the lack of co-op. I would have been intrigued how the game would play with your companion being controlled by another person. Development wise I can see how that would be in danger of breaking - or at least complicated - much of the level design, but it would still have been a nice touch.

How well you take to the game is determined by how juvenile you are prepared to be.

The wider game is pretty solid. There are camera and clipping issues now and again but not enough to break your enjoyment. In fact, how well you take to the game is more determined by how juvenile you are prepared to be. If you can relish the violent in jokes and revel in the over the top swearing you will find plenty of fun here. But if you are looking for something even slightly nuanced though, maybe best to move on - dog or no.

You can support Simon by buying Dead to Rights