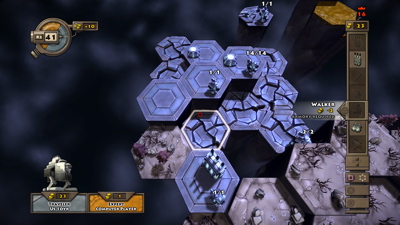 Despite the enormous cost of developing retail games for this generation, online distribution models offer hope for less popular genres. Turn based strategy is the rarest of the rare, but the chosen method for Greed Corp to tell its tale of resource shortages and the inevitable wars that follow.

This isn't the type of game I would usually pick up, but there is enough buzz about its implementation to pique my interest. Once downloaded it wasn't the 8bit war game feel but rather the complexity that most hampered me. There is a lot to learn here, again much like classic turn based games of yore.

Greed Corp is a combination of assimilating land and harvesting resources - which has the unfortunate side effect of destroying the land you have just captured. You have just a handful of units. Walker do the conquering - superiority in numbers all that's needed here to guarantee success. Cannon's enable access to remote hexagons, but due to the price of shells this is usually a weapon of last resort. Finally, for even more cash Airships enable the invasion of far off lands, but these take an entire turn before they are active giving opponents warning of your intentions.

Given these few tools I felt really rather dim to start with as I was constantly defeated. Eventually though, I got a grip of what was happening around me and started turning the tables. Some simple tactics really are the difference between winning and losing, such as ensuring that your borders are protected by the maximum number of walkers to prevent unexpected invasion. Another ruse is the invasion, followed by the planting of a Harvester. Even if this move means that you are overrun in the next turn, the presence of the harvester will eventually take out that hex, which if you are lucky will see off the enemy.

I began to enjoy the games of brinkmanship against my neighbours.

Given this limited command of my units and tactics I began to enjoy the games of brinkmanship against my neighbours. Being too aggressive too early and an avoidable war would ensue. Had I been more calculating with my nearest their other neighbour might have distracted them with a bit of illegal annexing letting me build up my forces and launching my own crushing invasion.

The potential flaw in having so few types of unit is that eventually there may only really be one way to win. But level design and turn based strategy are so far holding out and I'm still enjoying winning and losing. Since it's usually obvious after only a few minutes whether you can win that round, it's nice that you can just concede and start again.

Eventually I took the fight online and it's here perhaps that Greed Corp will provide its greatest enjoyment. Beating the computer is satisfying, but there's nothing I enjoy more than beating the living. Close run games with my nearest and dearest is proof of the good that playing games can bring people closer together, even if this involves shouting names at siblings over Xbox Live.

Its a game I'll return, particularly in moments where I want a cerebral rather than pyrotechnic fix.

Greed Corp is not a game that's going to change my life, but I'm glad I took the time to learn its simple yet involving mechanics. Its a game I'll return, particularly in moments where I want a cerebral rather than pyrotechnic fix. Technically speaking, the restraint in unit types, hexagon turn based play and generally well balanced play is testament to how well the developers understand the game they have created.


You can support Simon by buying Greed Crop