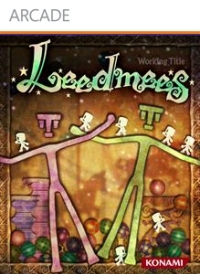 Other GamePeople columnists have reviewed this from their perspective - huh?:
Family Gamer (360)
Family Podcast (360) 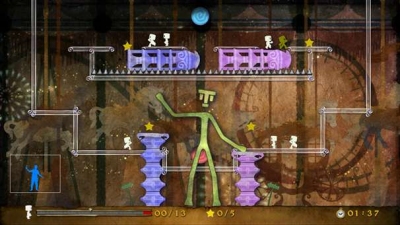 Leedmees creates a full body platform game that combines the puzzles of Lemmings with the living room limb stretching of Twister.

Game hardware, like technology in general, has to justify its existence. It's not enough being new and shiny, there needs to be a concrete reason that you can't live without it.

Case in point, the (not so) recent trend in motion controlled gaming. Each motion innovation needs a game to make sense of what can seem rather gimmicky. Boom Blox on the Wii and Sports Champions on the PS3 were both games that simply wouldn't work without their related controllers.

Leedmees is the first Kinect game we've played that made us feel the same - it couldn't exist with without the 360's full body controller. In our time with the game at E3 it quickly became clear that this was as joyous to play as it was unusual.

The idea is simple, use your body to guide an endless flow of little white people from the blue Entrance to the red Exit. Along the way you need to negotiate platforms, switches and various dangerous obstacles.

The execution and use of Kinect turns this simple premise into a hysterical and challenging platform game. A stickman character stands in the middle of each level and matches your movements with only minimal lag. By moving your limbs and torso you can create temporary bridges, punch out obstacles and even lean down to pick up the little men who've fallen on the floor -- and I challenge anyone not to smile when one of them hops up onto their outstretched hand.

Kinect injects a physicality that makes it feel more like a game of Twister or Charades.

Without the motion controls this would be another Lemmings, Mario March of the Minis style puzzle game. However Kinect injects a physicality to proceedings that makes it feel more like a game of Twister or Charades. Like other Kinect games it is amusing to watch people play, but here there is also a strong relationship between the living room theatre and on screen antics.

Add in a second player and this sense of bodily fun is accentuated. The co-operative mode provides more complex levels that require co-ordination and team work to. Some levels have the Entrance or Exit attached to one of the players hands or feet. Hopping around trying to keep your leg still so the other player can direct the little people to the attached exit, while trying to avoid squashing any on the floor, results in all sorts of contortions and more often than not a heap of giggling players on the floor.

As we got used to the controls we realised there was more you could do here than just hold your arms out. Before too long we were quite literally juggling the little Leedmee guys from one arm to the other - like a psychotic East End fruit and veg seller. The physics of these interactions help create a strong connection to the game, but also enable more complex challenges as the levels develop.

Another big step in the right direction for the hands free controller.

There were still a few moments when Kinect seemed to lose track of us, but these were sufficiently few and far between. Perhaps the biggest downside is the lack of online multiplayer with just an online leader board promised.

That Leedmees is an XBLA game with 50 single player and 12 co-operative levels makes this all the more impressive. Along with other upcoming Kinect titles like The Gunstringer, Once Upon a Monster and the recently released Child of Eden, it is another big step in the right direction for the hands free controller.

You can support Simon by buying Leedmees