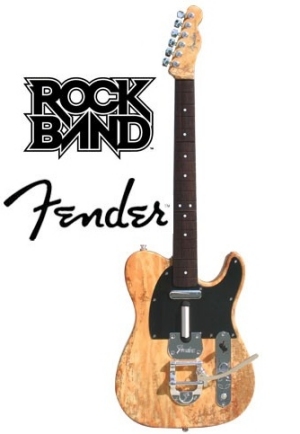 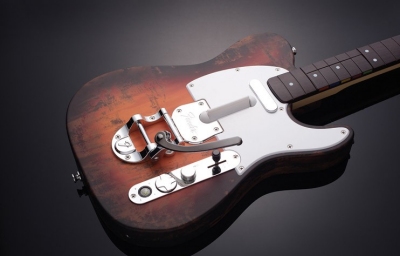 While the stock Guitar Hero and Rock Band guitars are all well and good, it's not long before your eye wanders to more enhanced models. The Xbox 360 Rock Band Wireless Fender Telecaster Player's Edition Replica is a guitar from Madcatz that although needs a little time to get to know, adds a touch more authenticity to your fake plastic rhythm action gaming.

A fresh guitar might be to replace an existing guitar with one with a nicer, more realistic appearance or a higher build-quality or alternatively to let you get the band experience with guitar and bass playing. Either way Mad Catz have produced two very nice looking officially licensed Fender Telecaster Rock Band guitars with custom road-worn finishes in either Butterscotch or Sun Burst designs. They are sold as Rock Band guitars but are also compatible with Guitar Hero 4 and 5.

I had the Sun Burst model to review and first appearances were - wow, cool! It's a really nice looking guitar, coming in a large box with just the headpiece needing to be slid into position to be ready to play. The head even has working tuning knobs, which is neat, and the overall appearance is very impressive. I particularly liked the look and feel of the neck, which feels almost real, and the fret buttons which are flat to the neck.

So to use it I'll have to alter my playing style slightly which always feels awkward for a while.

The Rock Band Wireless Fender Telecaster comes with a couple of major differences from the standard controller. First up is the touch-sensitive overdrive button that sits between the strum bar and the neck. This is an alternative to tilting the guitar which I know some players find a pain as it breaks the flow and can often result in you hitting a bum-note resulting in a x2 multiplier instead of x8.

Having a touch sensitive bar instead of a button is a great idea but it'll still take some getting used to. I find that when I play I use first finger and thumb on the strum-bar, and this doesnt leave me any fingers free to hit the overdrive button with. So to use it I'll have to alter my playing style slightly which always feels awkward for a while.

The second major modification is the all metal Bigsby bridge whammy tailpiece which looks great but I didnt get on with particularly well. Its pretty stiff and creaks a bit when you use it, but I think the major thing is that is just seems to be in the way all the time - almost touching your hand as you are playing. You can swing it out of the way but this movement is also quite stiff and so if you do so you may find it hard to swing it back into position in time to use during a track.

If you are looking for a second guitar or a replacement then take a look at one of these upgrades.

These guitars come with new fast-action Shredderz fret buttons. These are flat to the neck and hinged at about the three-quarters point. I found that they were a little stiffer than my old Guitar Hero 3 guitar - though that may be because that one is wearing out! My fingers did start to tire after particularly long or complex tracks. One thing that this hinging means is that you'll have to press the edges of the buttons rather than the centres, which may be another thing you'll have to get used to. And although the strap points can be moved to suit left-handers it also means that fingering would, I imagine, be slightly awkward for them - requiring the buttons to be pressed towards the top edge of the neck. The solo frets at the base of the neck are of the same design so the same applies to them - and means you wont be able to slide up and down this section if that was your style with other guitars.

Finally, the strum bar is similar to my Guitar Hero 3 guitar - i.e. fairly clicky. I was used to this so it wasnt an issue but I have seen a few posts complaining about it from people used to a quieter action.

I personally liked playing with this guitar, as did my elder son. My younger son didnt get on with it though, and reverted to playing with a borrowed GH4 guitar. He felt it was too stiff and said he was missing notes because they werent being registered. With persistence he would change his mind but I suppose it depends whether you think there are any ultimate gains to this persistence - if you've already got a guitar that plays well then maybe youre better off sticking with it. But if you are looking for a second guitar or a replacement then take a look at one of these upgrades.