Other GamePeople columnists have reviewed this from their perspective - huh?:
Intimate Gamer (360) 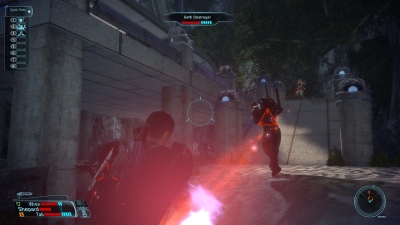 There's is nothing like being immersed in a sweeping and operatic space opera, complete with firefights, plot twists and romantic liaisons. Mass Effect has all these attributes by the bucket load and I was constantly involved in all the sci-fi fantasies I could dream of. With superb cinematic presentation, I found myself overlooking the awkward combat and enjoying this game immensely.

There's no other way to describe Mass Effect's start than epic and the cinematic entrance of the hero grabbed me from the beginning. I've been a fan of Bioware's work in the past but this time, the mechanics of the game have been refined and honed to near-perfection.

Once the first few hours had passed and I started to branch out into the galaxy it struck me how deep the universe was. There are aliens harbouring long grudges against each other, different cultures to explore and interesting team-mates to recruit. But what I found most stunning were the conversations.

Mass Effect has such a cinematic style when conversing that there were times when I just sat back and watched, fully immersed in the Mass Effect world and story.

Conversations? Well yes - the new method of interaction with characters has changed from selecting exactly what you say to a more general response. Not revolutionary, but it actually made me watch and listen to conversations instead of mindlessly clicking through lines of text or speech. This method of interaction was essential drawing me into the story and its universe even further.

It's not just the method with which these interactions are carried out that makes it compelling. It's also the presentation. Mass Effect has such a cinematic style when conversing that there were times when I just sat back and watched, fully immersed in the Mass Effect world and story.

Even though this over-arching story isn't particularly unique, it's told in such a professional and involving way that I felt compelled to progress. On many occasions I found situations that required a degree of moral or ethical choice that wasn't presented as a clear black or white. As I poured my experience points into my Charm and Intimidate skills I found this opened the dialogue tree even more. Thanks to this I couldn't help but turn my Commander Shepard into the manipulating lady I secretly wanted her to be. Bullying petty criminals or flattering politicians to get what I wanted was always a thrill.

Becoming romantically involved with some of them was also an interesting addition, especially when a certain dramatic choice came my way in the middle of the game.

Although the side-quests were never up to the same standard of the main story they're still a good way to earn more experience. Investigating each of my team member's back-story also added a layer of depth, making my choices for the squad far weightier. Becoming romantically involved with some of them was also an interesting addition, especially when a certain dramatic choice came my way in the middle of the game.

Being tech minded in real life meant I connected with the information recovery missions. One in particular made me smile because I had recently been wrestling with data recovery in my day job.

In this particular mission, halfway along the Skyway I noticed that I could stop and check in with the survivors of ExoGeni who were hiding in the weigh station. It took me some time to realise it but this enables you to talk to Gavin Hossle who then asks you to retrieve some of his data from the ExoGeni HQ.

While it's not quite the same level of Raid Data Recovery I face in real life, I liked taking on a mission that those skills made feel familiar. To progress you need to find a console at the top of a flight of stairs after the Geth claw.

Again, not something quite mirrored in real life Laptop Data Recovery is the platoon of Krogan guarding the access point. Although it took some time and didn't make a huge difference to the main plot, it is this sort of side-mission that makes Mass Effect so engaging. Also, as you find out on completion, Gavin is a generous tipper.

My team-mates AI also seemed to suffer with a little of the Star Trek red shirt syndrome.

One of the big changes to usual is the combat system, which improves dramatically on the turn-based system of previous games such as Knights of the Old Republic. It's a fairly generic cover-based system but it worked really well when I played as a soldier class. Choosing a more biotic-based class changed the combat style dramatically. Instead of running and gunning I had to hold back, direct my squad, and choose my moments with more care.

This system jarred slightly when it came to swopping out weapons or using a lot of biotic abilities. Changing these meant pausing the game each time I wanted to swop items or abilities around, leading to a very stop-start experience which left the real-time combat system redundant.

My team-mates AI also seemed to suffer with a little of the Star Trek red shirt syndrome, charging into battle unnecessarily and leaving me to revive them or face the enemy alone. The only way to get round this was to explicitly order them to say back or take the plunge myself. Once I got used to the little foibles of the system however, encounters became enjoyable especially when combining the talents of the squad. Hoisting an enemy up with one character, disarming them with another and then blasting them myself with rifle fire was pretty awesome.

But Mass Effect would be nothing, even with MENSA level team-mates, without a decent story and it delivers a ripping space-yarn. It's not War and Peace in space, but to get a videogame with such strong dialogue and intricate characterisation is an achievement worth celebrating. Its cinematic introduction is impressive and the last hour of gameplay is the strongest part of the game. It successfully combined a variety of intense firefights and a few dramatic plot twists right until the end. This memorable finale reaffirmed my belief that this is one of the best role-playing games that I've ever experienced.

You can support Simon by buying Mass Effect