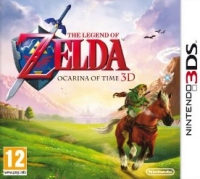 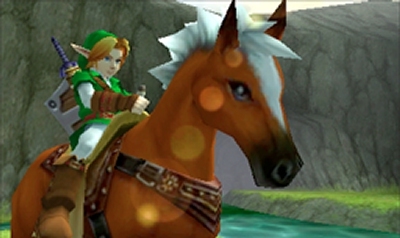 Ocarina of Time 3D provides much more than a retro re-release, with improved graphics, intuitive controls and access to some of the handy functions provided by the 3DS.

It's not uncommon for Nintendo to re-release old games on new hardware. The Wii featured plenty of older titles via its download service, including the full N64 version of the The Legend of Zelda Ocarina of Time at a fraction of the retail price of this new release. For this reason, I was curious to see how worthwhile the 3DS version of the game would be.

First things first, the 3D visuals are particularly impressive. Nintendo seem to push the boat out much further with stretching the depth of the 3D in their games. Pilotwings (3DS) combined a lavish draw distance with choice objects which protruded out of the screen; so, too does Ocarina of Time 3D, only in a slightly more haphazard fashion. In an instance where the camera becomes stuck behind a piece of scenery (fairly rare) the result is an object projected so far forward it makes for some uncomfortable viewing and breaks the illusion.

But it's still a very engrossing effect. It's at its most effective during narrow tunnels rather than the open plains, but even in large areas, the sense of scale is impressive. The effect comes into its own when using the bow or slingshot weapons, providing a valuable sense of distance; this is handy for timing a shot to a moving target.

The motion controls are perfect for this.

The graphics themselves have been up-scaled from the N64 version. Overall the objects and textures are far sharper and clearer than they have ever been and for those that appreciate pretty graphics, you could just as easily call this release Ocarina of Time HD and be quite satisfied with that result.

Probably my favourite enhancement to the game is the way the free-look, slingshot and bow use the motion controls of the 3DS to aim. I think it works so well because usually when taking aim I found myself already pointed in roughly the right direction and I only required a little adjustment in first person.

The motion controls are perfect for this and blend into the design seamlessly. The free look is also pleasantly immersive and highly accurate when standing up and looking all around oneself to explore an environment visually. When in a position where standing up and moving in this way isn't appropriate, the analogue pad serves just as well.

Other peripheral benefits come to Ocarina of Time 3D through the 3DS interface itself. The design of the Zelda games tends towards large open areas in which the player is rarely restricted by invisible walls or locked areas. Usually, progress is impeded because the player has not yet gained an item which will facilitate progress (such as the grappling hook or deep dive ability).

As I played Ocarina of Time, I found that I was coming across things which I knew were significant, but that I would have to return to a later time. Only there are rather a lot of these and for the first time I found myself switching to the 3DS Home Screen to make use of the handy notepad feature (ed: now there's a good idea why didn't I think of doing that).

This sounds like a small benefit, but one of the irritations I find with Ocarina of Time 3D is the amount of tiny, never-repeated nuggets of information that the game expects me to remember. For example, (here's a hint for when you play this) on your first visit to the Sacred Meadow there is a maze which guides the player using music cues. Whatever you do, write down the sequence! Later in the game you have to retrace this path without the music and as far as I can find the game provides no assistance in this task (I resorted to the Internet).

Ocarina of Time is less helpful when it comes to where you are meant to be heading next.

There is a handy hints system in-game, but this really only relates to specific puzzle solutions which are, by and large, intuitive and rewarding. Ocarina of Time is less helpful when it comes to actually helping you remember where you are meant to be heading next. It's perhaps down to the open exploration design: since the game isn't funnelling me down a particular route it is by extension possible to wander almost everywhere in search of the next bit of progress.

My main objection to Ocarina of Time, old and new, remains the massive amount of travelling and back-tracking I seem to be forced to do. This is particularly irritating when the game presents a challenge without really explaining the rules. For example, quite late on in a particular dungeon there are shadows which indicate a creature falling from the ceiling. Most monsters deliver damage, so I didn't trouble myself too greatly. However, had I known that this particular creature returned the player to the dungeon entrance I may have been more circumspect. This caused a lengthy retread of the entire level.

In the same way, every time you pick up the game it starts from Link's tree house. Okay, so this creates a nice feeling of connection to 'home', but on the original N64 it necessitated a 10 minute walk back to wherever I was when I saved the game. Thankfully, this is an area where the 3DS can save the day. By utilising the handy 'sleep' function of the 3DS I need never turn the console off. That's it! I'm simply never turning the 3DS off until I've finished Ocarina of Time 3D!

Ultimately, whether Ocarina of Time is a game you are looking to revisit or whether you have never played it before, the Nintendo 3DS version is an incredible re-mastering of the classic game. Despite a few rough edges, the design stands up very favourably to modern games and belies the 13 years that have passed since Ocarina of Time was first released.

[Chris Jarvis writes the Novel Gamer column where you can read his Zelda Ocarina of Time fiction.]


You can support Simon by buying Zelda Ocarina of Time