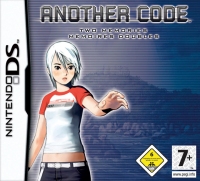 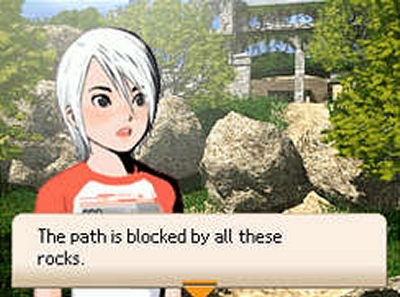 Another Code Two Memories was first with some great techniques on the new DS technology and it creates an unusually intriguing but languid proposition. Beyond the novelty, and looking at it a few years later, the game itself isn't as strong as many may remember it.

From the now sadly defunct Japanese studio Cing, Another Code: Two Memories was touted on its release as the first proper use of the DS's unique technical features. Five years on, I look at whether this adventure game still warrants your attention - and just how well it executed its unusual interactions on the DS hardware.

My journey to getting hold of Two Memories on DS was quite a tortured. I had been watching the second hand price of the game fluctuate between daftly expensive and almost justifiable for several months. Eventually my patience prevailed and I saw it going at a reasonable price on Amazon's marketplace. Three weeks later and it still hadn't arrived prompting several unanswered emails to the seller.

My last resort was to log a complaint directly with Amazon and this finally prompted the guy to ship me my game. I suspect that he realized that the cartridges were fetching more than GBP50 at the time and decided that he should hold on to it. Anyway, given how prized the game obviously was I was doubly hopeful that it would live up to the hype.

If Another Code were a person, it might be a little embarrassed by all the fuss it received on release, given that it's a fairly understated adventure game that does very little to shout about its contribution to DS gaming history. That was certainly the impression I got from my first couple of hours of play, which focuses on the story of a 13 year old girl and her search for her father on Blood Edward Island. I'm still not sure how I feel about playing the character of a teenage girl, but to be fair gender or age doesn't really impact the story.

I used to be a fan of Lucasarts style adventure games, but Another Code is the first game of that type I've played for many years. The writing in Another Code doesn't recapture any of those fond memories, but the addition of the stylus, the microphone and the two screens certainly adds something to the genre.

Were this the first time I had seen these mechanics, they would have impressed me more.

It's difficult to give too many details of the various techniques the game asks you to use to interact with it, without giving you clues or spoilers, but each one is well implemented. The first time you have blow in the microphone to clear dust or close both screens to solve a puzzle does provide a moment of satisfaction that can't be emulated on another platform. Were this the first time I had seen these mechanics, they would have impressed me more, but seeing them so long after the original release doesn't provide the same impact.

The atmosphere generated is also fairly unusual - it's just so subdued almost to the point of dullness. If, like me, you often finish you day playing a bit of DS in bed, this actually works quite well. Although its sleep giving qualities are not the best ringing endorsement for a game, the soothing tone and relaxed pace is perfect for when you want a break. And thankfully, use of the microphone never requires you to shout "Objection!" at the top of your voice, making it tolerable for a sleeping partner!

The main story is of discovering who you are and what happened to your parents, but unfortunately it's not particularly interesting and never demanding my attention. I just couldn't bring myself to care why Ashley's father left her in the care of her aunt or what Another was, which is the main mystery requiring your investigation.

I can see why people lauded it for use of technique and technology.

The puzzles range from the blindingly obvious to the frustratingly obscure. Too often I knew what I needed to do, but I just wasn't quite doing things in the correct order. Only once or twice did I have to give up and refer to the Internet, which I am never proud of when the game merely requires mental ability.

By the time I had finished Another Code, which took less than six hours, I was glad I had. Whilst I can see why people lauded it for use of technique and technology, someone seems to have forgotten to make a compelling game at the centre of it all. It was popular enough to get a sequel on Wii, but if you've not played this you can rest easy in the knowledge that although technically impressive you've not missed out on a classic.

You can support Simon by buying Another Code Two Memories