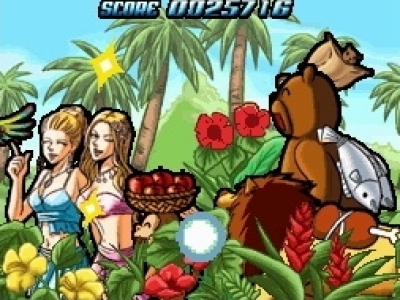 By embracing the touch-screen technology and having levels that can be completed in three minutes, Elite Beat Agents is the game the Nintendo DS was made for.

A rhythm action game developed by iNiS, the team behind underground and hard-as-nails PlayStation 2 classic, Gitaroo Man, and the karaoke Xbox 360 game, Lips, Elite Beat Agents is as innovative as the DS itself. You control the titular Agents, three hyperactive, microphone wielding, stylishly coiffured divas stuffed into Men in Black suits complete with shades. They are super-heroes of sorts, jumping into action wherever there is a problem that can only be solved with song and dance.

The titular Agents appear only in the direst situations, providing hope and courage with their grooves and sweet boogie moves. How you follow the choreography on the bottom screen affects a crazy crisis playing out up top, and these components make Elite Beat Agents an irresistible handheld game.

Of course, this rhythm game is built on simple manoeuvres; you have to tap, drag, and quickly spin objects in time to the music. The melody isn't your only guide, though. Timing circles close in around each marker, giving valuable visual cues of when to make contact. The touch screen adds another element to the gameplay, because you must remember the layout of the targets. They appear in a natural stream across the panel, physically pulling you through the song. It's much more dynamic than just pushing buttons in time.

The four difficulty levels - two must be unlocked - provide a perfect challenge gradient by incorporating different amounts of user engagement. At first, you're involved in only the most essential beats, and missing a few isn't fatal. The songs remain the same, but by the third stage, you cover every lyric, drum stroke, and guitar riff. Here, there's no forgiveness; fall out of sync and the Elite-O-Meter will quickly run dry, prematurely ending the tune. The hardest setting further ups the ante by making the targets smaller and having them appear closer to the beat, disturbing any comfort zone established at lower levels.

The song selection is meant to keep you off balance as well. Some have a straightforward rhythm, like Chicago's power ballad from the 80's, You're the Inspiration, or more recent punk-pop from Sum 41 and Stereogram. Then there's the swinging syncopation of Rock This Town from The Stray Cats or the 70's style funk of Jamiroquai. It also contains authentic entries from the era of disco, with YMCA and the pop-soul of the Jackson 5's ABC.

This is rhythm action at its purest and most accessible.

The songs are presented in batches, so there's almost always a choice of what to tackle next, but the mixtures of style keep you out of a rut. The nineteen tunes carry through loud and clear on the DS speakers. Even though they're all sound-alike covers, the quality is so high it's hard for a casual observer to tell. Plus, the covers postpone unpleasant moments, like discovering your best effort comes from a piece originally performed by Ashlee Simpson.

The individual tunes do have to share top billing with the wacky stories playing out on the upper screen. When the game's main characters are a trio of booty-shaking secret agents, reality falls by the wayside, and these vignettes are designed to be as humorously outrageous as possible. Adventures range from foiling a casino heist, to battling a fire-breathing golem, to staving off a horde of smooching zombies. Even a relatively mundane scenario, like helping a spoiled pair of socialites survive a desert island (set Madonna's Material Girl, no less), is energized by the presentation. The comic book-style panels set a playful attitude, featuring simple animation, vibrant colours, thought bubbles, and even onomatopoeia floating in the background. It's not all just for laughs, though. There's an especially touching Christmas episode about a little girl who misses her deceased father.

Trying to keep an eye on both screens simultaneously while you play is next to impossible. Realizing this, the iNiS have included a replay feature, so you can view all the hijinks undisturbed. You can even save a run-through of each song to watch whenever you like. However, your eyes may still drift down to the bottom screen to watch the slightly blocky men in black set the place ablaze with pirouettes, leaps, splits, and hand jives. Or you might just be hypnotized by your own marker-hitting triumph.

There's no need to rest solely on your own laurels, though, because Elite Beat Agents has both versus and co-op multiplayer options so you can jam with up to four people locally. The same songs are used, but the modes introduce new scenarios as entertaining as those from the single player mode.

Just as it should be for a console that is designed for play while sitting on the toilet.

Unfortunately, Wi-Fi isn't supported, so you may still end up as a one-man band, though you can compete against a ghost of your saved efforts. But alone or with a group, this demanding, multi-faceted rhythm challenge and its off-the-wall humour make Elite Beat Agents one hard rockin' game that sits perfectly at home on the Nintendo DS.

This is rhythm action at its purest and most accessible. Unlike music games on larger, home consoles, Elite Beat Agents on the DS requires no setting up of instruments, no excessive load times, no character creation or any other time wasting fluff. Your minimum wait from inserting the cartridge to playing your first song is no more than one minute; just as it should be for a console that is designed for play while sitting at bus-stops or even on the toilet.


You can support Simon by buying Elite Beat Agents