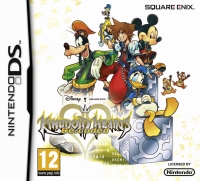 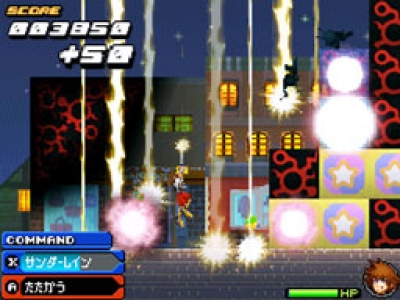 Kingdom Hearts Re:coded debuts on the DS as a light hearted adventure. Eventually though, this is let down by disappointing controls and a nonsensical Disney meets The Matrix story.

Kingdom Hearts Re:coded is a remake of a remake. Kingdom Hearts Coded was released episodically for mobile platforms between 2009 and 2010, and was itself a remake, or at least a re-imagining, of the original Kingdom Hearts. Re:coded is a compilation of coded, with a few gameplay additions. As if identifying where Re:coded sits in relation to the other games in the series wasn't hard enough, making sense of the plot is even harder.

The game starts innocently enough, with a whimsical opening where Jiminy Cricket discovers that his journals chronicling the previous Kingdom Hearts adventures have been wiped clean, replaced with a single line: "Their hurting will be ended when you return to mend it." Unsure what it means, King Mickey does the only logical thing: he gets Chip and Dale to digitise the journal and creates a digital hero to explore the worlds held within to find out what's wrong. This didn't make the slightest bit of sense to me, but I was charmed by the imaginative use of familiar characters all the same.

This digitised character turns out to be Sora, the hero from previous Kingdom Hearts games. He's a young boy with no really distinguishing features, except his Keyblade: a giant key he uses as a sword to defeat "The Heartless;" shadowy creatures who previously tried to steal the hearts of various Disney worlds. Fighting away shadows with a giant key is, I think, a fairly imaginative way of keeping the violence levels down: this is a Disney game, after all.

I was charmed by the imaginative use of familiar characters.

This time, however, you'll need to retrace Sora's steps and Debug the journal. The bugs manifest as Blox (literally just blocks scattered through the worlds) that must be either destroyed or utilised for platforming. Some Blox are movable, for example, to enable access to certain places, while others act as springboards. Dealing with the Blox leads to the uncovering of glitches, which are small, Tron-like datascapes with a number of Blox that need to be destroyed. The final glitch in a world is, typically, a boss, who is naturally the main cause of the bugs. Each boss is pretty unique, and the final stage of each world utilises a different gameplay type (side-scrolling, for example), which adds nice variety.

The bulk of the game is spent in combat with various Heartless enemies, and the action is decent. It's technically a simple system, with a basic attack and special moves that can be learned later on. Up to three special moves can be active at once, but there's only one button for them which rotates between each move after use. You can manually rotate by holding down the left trigger and selecting which one you want, but I found this far too clumsy to do in the middle of combat, so I just let the system do its work, resulting in a sort of special move roulette.

There are also platforming elements. While well implemented, I wonder if they're not just a little beyond the DS' capabilities. Though the DS demonstrates its power well in rendering some lovely 3D environments, the digital control pad is still better suited to the 2D Gameboy experiences from whence it came. It’s not up to the task of navigating a 3D environment, and this led to frequent frustrations, both platforming and in combat.

It's technically a simple system.

Beneath the surface, there are also some competent RPG mechanics adding a surprising amount of depth. Collected items can be added to either your "Stat Matrix" or "Gear Matrix," while new abilities can be added to the "Command Matrix."

It's the Stat Matrix that's the biggest departure from typical RPG's; boosters, such as strength, defence or level-up's can be found, and are then added to your Stat Matrix, which resembles a motherboard. There are a number of tricks to get the most out of them, such as adding them to a path between two active "CPU's," which doubles the token's effect. It's a neat system, but I found it bordered on too abstruse for its own good, especially when it's first introduced.

Re:coded remains a whimsical journey, happily observing its own peculiar brand of logic.

Each world is beautifully realised, but also too small to really give a sense of adventure, and the episodic nature of the source material means the game lacks cohesion. Each gameplay element is good, but it feels as though this is one game that would benefit from the console treatment, where combat could be more complex, the worlds bigger and the controls more precise.


You can support Simon by buying Kingdom Hearts Re:coded