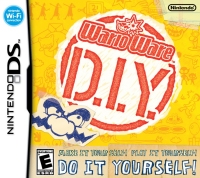 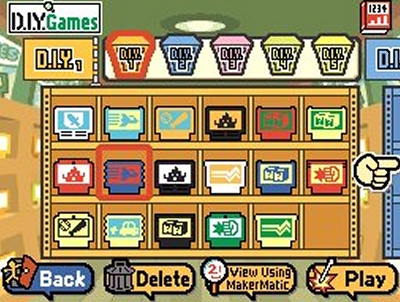 WarioWare DIY flexes Nintendo's considerable ability to make complex tasks simple and enjoyable. Game development 101 has never been more intuitive. Alongside these goods though is their unwillingness to enable players to interact with strangers, limiting the audience for your WarioWare DIY creations considerably.

In WarioWare D.I.Y. you create your own WarioWare micro-games - complete with graphics, music and packaging. Once you have worked through the tutorials and created your game you can share it with friends via Wi-Fi, Nintendo Wi-Fi Connection or finally play them on the WIi via the Wii-Ware WarioWare D.I.Y. Showcase game.

For an up and coming game designer like me this is all pretty inspiring stuff. It's a shame though, that you can only chare creations with friends. Compared to Little Big Planet's ability to create a game then publish to the world and see how popular it becomes WarioWare DIY's sharing is pretty limited.

I like that Nintendo, along with some famous people, will provide a steady stream of games to download but again it seems that they should also select the best user created content and promote that as well. There are contests planned to plug this hole in the future, so fingers crossed that helps budding designers get their WarioWare work in front of a bigger audience.

Even though I'm well acquainted with the game development process and the elements involved, I was really impressed by the clarity on display here. In fact, revisiting some of the building blocks to game creation help refresh some old ideas for me and got me thinking of new ways to create games again.

Even though I'm well acquainted with the game development process and the elements involved, I was really impressed by the clarity on display here.

I would have like to be able to skip the tutorial, which took around 30 minutes to work through, but it was well written and did ensure I knew the basics before I started. WarioWare Do It Yourself may need a little time invested to enjoy it, but it can pretty much turn anyone into a basic game designer in just a few hours - which is kind of worrying for someone just getting into that industry.

As well as all the game creation modes there are 90 or so WarioWare minigames packed in. These are of the same format as previous games and we get to revisit Mona, Jimmy T., Ashley, Orbulon, and 9-Volt. Along with this, WarioWare D.I.Y. Showcase on the Wii offers a further 72 pre-made micro-games featuring Wario-Man, Dribble & Spitz, Kat & Ana, and 18-Volt.

It makes game design not only understandable and simple, but also a lot of Wario inspired fun.

The most impressive technical aspect of all this for me is that any game can be 'opened' to see how it was created. You can then edit it and save your own version. Not only is this great fun, it's also a really interesting way to learn how different designs are achieved.

WarioWare DIY does a hard thing - it makes game design not only understandable and simple, but also a lot of Wario inspired fun. The levels included, combined with those you can download and the ability to create your own make this one of the best value DS games to date. A technical marvel.

You can support Simon by buying WarioWare DIY