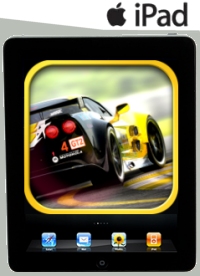 Other GamePeople columnists have reviewed this from their perspective - huh?:
Family Podcast (IPAD) 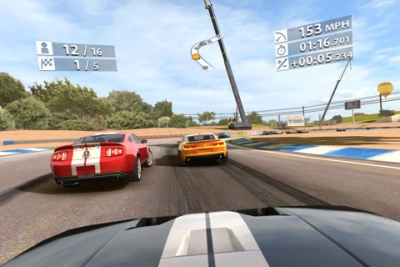 Real Racing 2 HD extends its impressive delivery for iPad and iPhone 4S with a new four player party mode. Elsewhere it puts the extra horsepower to good use improving visuals.

If you've not tried Real Racing (in any of its incarnations) you really should. You steer by tilting the iPhone/iPad. But the real magic is this thing it does where it tilts the screen in the opposite direction to you so the horizon stays flat. It sounds confusing but it makes so much sense you don't even realise it's doing it (ed: until some annoying tech games writer tells you).

Real Racing 2 HD already offered the ability to plug your iPad into you big screen to race on a grand scale. But now, a new update means the game will take advantage of iOS5's AirPlay mode. Sidestepping the technical jargon this means that one iPhone 4S or iPad 2 acts as a host (and plugs into your TV) while other iPhone/iPad players can join in and see their display sent to the TV as well.

This enables you to race against other people locally in either a two-player or four-player split screen mode. In theory this will leave the guest iPhone/iPad screens free to act as a map, telemetry or maybe even rear view mirror. Either way the number of ways to enjoy Real Racing has just doubled over night. It's a little like the ability to play Scrabble on your iPad and use your iPhone as the letter holder -- basically it makes you want to and go buy the whole family iPhones (or at least iPod Touches).

Other features of the AirPlay enabled game are the ability to stream the racing output to any HDTV, and to do so in a now borderless display with upgraded 3D visuals. As mentioned above this also leaves the Pad/iPhone screen free to be used as a second display - showing stats and maps.

This enables you to race against other people locally in four-player split screen mode.

Along with this play mode upgrade Real Racing also gets a graphical refresh in this update. Car interiors now feature real-time shadows and lighting, car exteriors have also been improved lighting and detail, various cars have been upgraded and details like front grills, handles and seams are all included in the modelling. This has been enabled by a 4x increase in the polygon count. 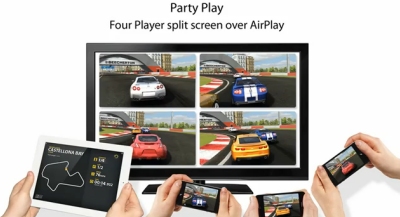 More general enhancements include improved reflections on all cars (ed: shiny cars are very important as any motoring enthusiast will tell you), better road lighting and improved building window reflections. This is rounded off by an HDR exposure effects to provide more dynamic range adjustments when in shadow.

More than a passing resemblance to some WiiU play modes.

But it is the AirPlay features, rather than these graphical improvements, that will catch most people's eyes. The sharp sighted will notice more than a passing resemblance to some WiiU play modes where the controller provides a second screen for extra information. 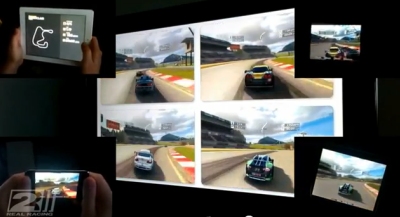 This takes a feature that has previously been the reserve of the console gaming elite and slaps it down (pretty much for free) in front of the casual gaming masses. These improvements would be enough to warrant a new version of Need for Speed or Gran Turismo, but in the Apple ecosystem this comes under the remit of a free update.

All this for a game that cost less than a tena in the first place. Technically, enjoyably, graphically, this is great value for money all round.

These new Real Racing 2 HD features are available from 12th October as a free update to existing owners or a standalone download for iPhone (GBP 2.99) or iPad (GBP 4.99).

You can support Simon by buying Real Racing 2 HD