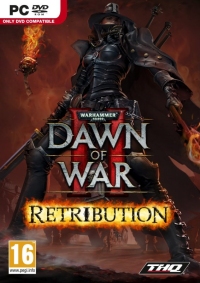 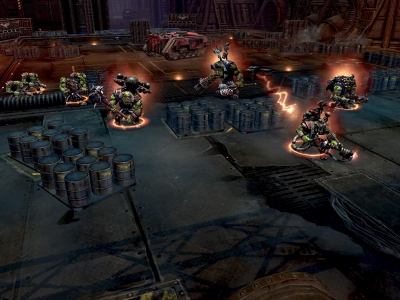 Dawn of War 2: Retribution brings the magic of 40k to the gaming masses. Even without the painstaking application of Bilious Green, Chaos Black and Ultramarine Blue, it still manages to create a meaningful tabletop battle experience.

OK, so I still am, really; just one that has significantly less free time. Dawn of War 2: Retribution means I can indulge the Warhammer 40,000 super fan in me without having to sacrifice things like sleep in the pursuit of a perfect paint-job and those inevitably drawn out games. It's one of the best strategy games around, but being electronic means sacrificing the very personal input that comes from building and painting your own models.

Retribution works hard to earn favour though and brings the Warhammer 40,000 universe to life. Units animate and interact exactly the way I've imagined them to for so many years. Ruined cities are littered with crumbling, gothic architecture. Soldiers sprint across these battlescapes carrying guns as big as themselves. Heroes eviscerate their enemies with genuine xenophobic hatred.

The Dawn of War series typically focuses on the Space Marines. They're by far the most popular of the 40K factions: eight-foot tall, genetically modified warrior-monks with robotic armour and the biggest arsenal of guns and tanks around. Retribution gives players the choice of six different campaigns to play, each from a different races perspective. The storyline concludes events set underway as far back as the original Dawn of War in 2004, so the Blood Ravens Chapter of Space Marines are at the centre of proceedings. Unfortunately, each campaign is built on the same set of missions with few differences, reducing replayability. However, the real strength here is customising your heroes with the equipment you find along the way.

While the 40K Universe is rich in myth, stories in videogame adaptations tend to be far too generic to be interesting. The original Dawn of War, for example, was incredibly bland, half-heartedly cobbled together from other, better stories. This is unfortunate but in some ways necessary in order to attract players not familiar with the 40K Universe. Retribution, however, shows Relic Games' increasing storytelling confidence, as they link back to previous events and give a few characters some genuine complexity.

Dawn of War 2 is an interesting and controversial take on the tabletop game. The campaigns in particular previously saw you in control of little more than a dozen troops, leaving fans of the series (expecting an epic slice of sci-fi strategy) a little disappointed. The focus is instead on using the troops you do have, constantly keeping them in the right place (usually behind cover) and making use of their special abilities to deal with problems as soon as they arrive. This massively increases the pace of the game, but is definitely not for everyone.

as great as Retribution might be, it will never substitute the satisfaction found in creating each of your troops.

Retribution adds the ability to build troops on the ground in single-player missions, which seriously adds to the chaotic combat. This slight increase in scale will not only please fans, but it makes the whole experience that bit more strategic, where before the game veered dangerously close to Action-RPG territory.

Between the campaign mode and the addictive multiplayer modes, one might expect Retribution to completely replace playing tabletop games of 40K. As any hobbyist will tell you though, as great as Retribution might be, it will never substitute the satisfaction found in creating each of your troops, taking them from pieces of plastic or metal all the way through to fully modelled and painted miniatures. And while the multiplayer modes allow for some intense games, there's a different kind of fun to be found in moving your personalised miniatures, rolling dice, consulting rule books and, importantly, being in the same room as your adversary. 40K is in no danger of being replaced by Dawn of War 2.


You can support Simon by buying Dawn of War 2: Retribution