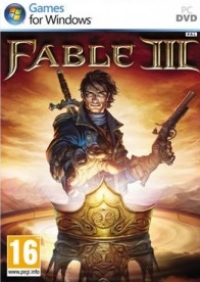 Other GamePeople columnists have reviewed this from their perspective - huh?:
Family Podcast (PC) 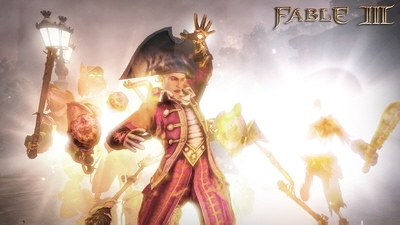 Fable 3 creates a memorable fantasy in Albion that is ultimately let down by a limited combat system, brief storyline and several failed attempts at streamlining. Explore the game at your own leisure though and it becomes something altogether more enjoyable.

My experience with the Fable franchise is limited to the first few chapters of the first game, originally released on the Xbox in 2004. I found the world of Albion to be beautifully presented, and the gameplay to be ambitious. Unfortunately, I found the boss battles uninspiring, and after several failed attempts to defeat one in particular, I gave up on the game.

As such, I missed Fable 2, despite it's positive reception. Thanks to Fable 3, however, I've found myself fully convinced to replay the first and find a copy of the second; not because Fable 3 is a great game, but because Albion is such wonderful place.

The game casts you as a young Prince or Princess (I chose the Prince), the younger sibling of tyrannical King Logan, under whose rule the Kingdom of Albion is in bad shape. Most of the population live in poverty, and are forced into slave labour. After a particularly vile act, you are compelled to leave and join the revolution against your brother.

So begins the first act of the game, which I found to be surprisingly linear for an open world RPG. For the first six or so hours, I had no choice in where I went or how I handled things. While most RPG's offer a linear introduction to the game, Fable 3's is particularly long, especially in comparison to it's overall short running time.

I split time between running through areas and fighting creatures or mercenaries. Unfortunately, the combat isn't particularly deep. You have three choices: melee weapons, gunpowder weapons and magic, or any combination thereof. Rather than offering up interesting combos to learn, I found I could just mash whichever button I felt like. Even worse, there is little to lose by dying, since you respawn instantly, having lost just a little experience. I thought the combat was a little tedious, especially the boss fights, which have found no improvements here.

Luckily, the world of Albion is populated by some wonderful characters. Your lifelong mentor Walter (Bernard Hill) and servant Jasper (John Cleese) are great company. My personal favourite was the oddball chicken farmer who needed me to round up his escaped poultry. His advice? Dress up as a chicken, and use psychological techniques against them.

The world of Albion is populated by some wonderful characters.

Convincing leaders to join the revolution is the main goal here. This generally involves making promises to them and completing quests to prove your worth to them, either specific quests or side-quests, for which earn you Guild Seals. These seals also act as experience points, which can be spent on upgrades in traditional RPG style.

Unfortunately, in order to make the game more streamlined and accessible, there are no traditional menus. Instead, you must head to the Road to Rule, a winding metaphorical path that you move along as you gain more followers. Along the way are various chests for you to open, should you have enough Guild Seals to spend. These chests contain various upgrades, including new spells, increased damage, or new ways to interact with the villagers of Albion.

I found this system more long-winded than accessible, as it involves a lot of tedious running around where a smooth menu interface would have been far easier. There are similar problems with the inventory, weapons, clothes and even the save menu. It's hard to believe that someone thought this was easier than menus.

Back to the storyline; once I had my first few allies, the world opened up to me a little more. It was here I found the side of Fable I enjoyed in the original game: exploring the colourful towns and villages. There's a neat system for interacting with villagers, involving actions such as hugging, kissing, belching, dancing and many more besides. These actions cause the villager to like or dislike you. Should you persist, you can take a villager on a date, wed them and even have children with them.

There are also several mini-games to partake in to earn money. Smithing, baking and busking with your lute are all played the same way: by hitting the right button at the right time, much like Guitar Hero (I particularly enjoyed the very funny Lute Hero). I found these games a fun distraction from questing, but not particularly original.

Just as I felt the game was coming into its own, the revolution was disappointingly over within half an hour, making way for an unusual final act. I had to take on Logan's place as ruler of Albion, and take on all the associated responsibilities. Given a countdown to a looming threat, I had to balance keeping the population happy, keeping the promises I made to my fellow revolters, and raising enough money for the army I would need.

In theory this is a great idea: too many RPG's have you overthrow tyrannical rulers, only to watch someone else take over and for everyone to live happily ever after. Here, you begin to understand why Logan was such a tyrant. I suddenly found myself having to turn orphanages into brothels to get anywhere near the money I needed to defend my Kingdom.

This system also makes the game surprisingly relevant: it's not hard to find comparisons with another country in financial and social trouble, a potential new leader travelling the land making promises of change, only to find he simply can't keep them all.

While this is interesting, it's also deeply flawed.

While this is an interesting prospect, it's also deeply flawed. While the decisions represent the morally grey areas real life leaders must navigate every day, the maximum three choices presented don't really cover all the possibilities. Further, the one year countdown proceeds in surprising increments: where I thought I still had plenty of time to raise the money I needed, I suddenly found myself at the moment of truth, the final fight for the fate of Albion. Which was disappointingly over in a matter of minutes.

Luckily, the game doesn't end with the storyline, and I was happy to find I could go back to exploring the world of Albion and completing the remaining quests. There aren't many overall: only a couple of dozen compared to the many hundreds in games such as Dragon Age or Oblivion. Nevertheless, I look forward to continuing my adventures in Albion.


You can support Simon by buying Fable 3