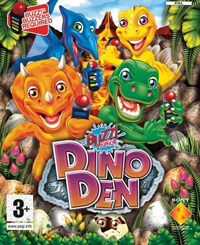 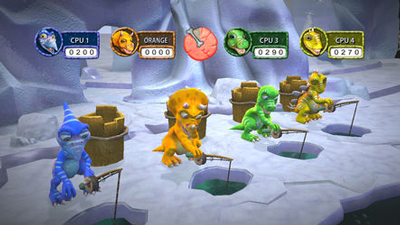 Buzz Junior Dino Den PS3 isn't technically a quiz game. Instead it offers a kid's mini-game collection. Although this development technique lacks in variety and there's little to entertain adults, it's spot on for kids.

I used to play the Buzz quiz games all the time, alone or with friends because I really enjoyed them all. Despite my interest I never quite got into the Junior games and when first hearing about them I assumed they'd be a stripped down Quiz game for kids. Dino Den isn't and I'm willing to guess the other Junior games aren't either, but this is a good thing as I doubt they would keep the kids attention for very long. Instead, Dino Den is a mini game collection that uses overly expressive and characterised dinosaurs to keep the little ones attention although it can get repetitive quickly.

Buzz is a quiz game where you take control of a Buzzer to answer questions on a 'game show' to win points and various challenges. They're a brilliant little game to have on a family game night or a dinner party and Buzz Junior: Dino Den, which was originally created for the PS2, is a worthy extension of the series. The game has been slightly remade, upgraded and now includes trophy support as well. This, along with a number of the other Buzz Junior games, has made its way on to the PS3 via the PSN.

The biggest omission being the chance to personalise your Dino. What kid wouldn't want that?

The game has only two modes, Quick Game and Standard Game so instead of playing eight rounds you play four. Dino Den also skips a few options like difficulty selection, name entry and Dino colour. Although it is nice to get straight into the game it would have been nice to have some options - the biggest omission being the chance to personalise your Dino. What kid wouldn't want that? The rounds themselves aren't any quicker than the main series games - it may contain only five rounds but I often felt they were far too long.

One such example of this is Elastic Racers where you must hold the buzzer button, that's the big red one, down to go. If you go too fast round corners you'll spin and thereby lose time or place if you time it wrongly. Although it's more fun with friends the same problem arises that it just feels too long.

I couldn't help feeling that if there were a number of different tracks the length wouldn't be too much of a problem. Other rounds include fastest finger matching the colour of meat, dodging tree branches while surfing upon a T-Rex, fishing using the Buzzer, and finally saving power to knock down a stalactite to make a bridge to cross a small river with the first one across being the winner.

Visually the game is colourful, expressive and looking great for a revamped PS2 game.

Visually the game is colourful, expressive and looking great for a revamped PS2 game. Every Dinosaur or caveman has brilliant animation, great caricatures and quite detailed character, as well as environments. The game runs at a solid frame rate and even using Wireless Buzz controllers there is never any lag between you pressing and the game reacting.

As a fan of the other Buzz games this like more of a distraction from the series than a next step - for grownups the game is merely a break. But for kids I can see them enjoying this quite a lot. It's just simple, pure fun to play and something different from the usual Buzz video games.


You can support Simon by buying Buzz Junior Dino Den