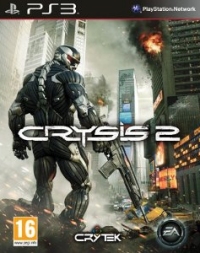 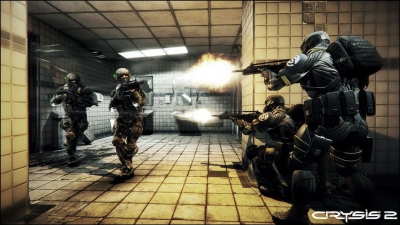 Crysis 2 will surprise fans of the first game by its willingness to deviate from that popular formula. In place of the open world of its predecessor this is now going to be a much more guided experience.

It's an hour-glassing trick that Halo learnt a long time ago. Play moves through different phases, sometimes are you charging forwards through the eye of a needle, or battling with choke points, while at others the game opens out into large spaces that invite you to explore and strategise.

The greater focus on strategy is underlined by Crytek's inclusion of a tactical assessment display that flips down to advise the best way forward in any particular situation. Whether you take the advice or not is then up to you. It's a clever system that lets you lock onto and track key enemy units so you can out flank or manoeuvre them.

From the outset you are met with an expanse of grey concrete and temporary buildings each packed full of guards. This gives you the first chance to try out some of your new strategies as well as acting as a living tutorial for all the nanosuit's new gizmos.

Like Motorstorm, Crysis 2 provides a variety of ways to conquer each section that mirror a variety of approaches.

The suit is still front and centre in terms of technology. But in Crysis 2 this extends beyond guns and gadgets as the suit is woven into the fabric of the story. It's a narrative set three years after the first game and still very much covered in secrecy.

As it unfolds the story follows Nomad, a Delta Force operative who, having silenced an alien infestation in the first game's Pacific island, is now a fugitive wearing an illegally acquired new nanosuit. This takes the action to the streets of New York where he now must defend against invading alien forces.

It's a stage that is carefully set to nudge players towards developing their own use of the suit's special powers. Like Motorstorm's different routes through each track matching specific vehicles, Crysis 2 provides a variety of ways to conquer each section that mirror a variety of approaches.

You might play the game as a would-be predator using mainly speed and cloaking features, or maybe you prefer to be a sniper using binoculars and ranged weapons, or perhaps a more direct approach appeals and you will use armour and heavy weapons to blast your way forward. Whichever it is, you have been catered for much more than in the first game.

Crysis 2 applies their technical approach to gameplay as well as visuals.

As well as inviting more imaginative play, Crytek have also been tweaking the individual abilities of the suit to ensure they are better balanced. You see this most clearly as each of the nanosuit's functions - speed, armour and invisibility - slowly deplete its energy at different rates. These limitations further accentuate the focus on strategy over firepower. Your route through the world need to be planned ahead of time if you are to avoid running out of juice at just the wrong moment and re-materialising in front of the heavily armed enemy.

Crysis has always been a technically demanding game - needing the very best of PC gaming setups to run it when it was launched - but Crysis 2 applies their technical approach to gameplay as well as visuals.

I'm looking forward to giving the game a proper run out on my 3DTV when it released in March on PS3, 360 and PC.

You can support Simon by buying Crysis 2