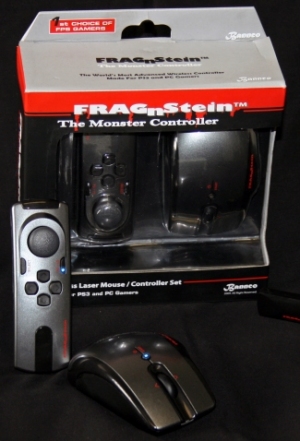 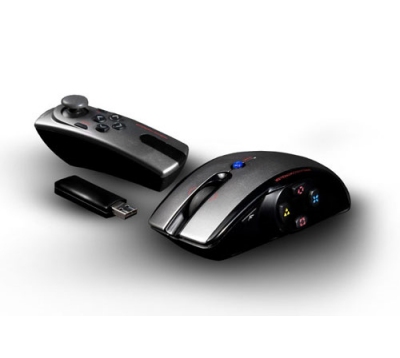 I've used a whole plethora of different gaming controllers since I first experienced gaming back on the ZX Spectrum. Believe it or not, the Speccy had no native support for any sort of controller and it was up to innovative companies to come up with something that worked. There was even a joystick that clamped to the Spectrum and the movement of the stick actually physically pressed down on those lovely rubbery keys!

We now control our games with a whole range of different devices depending on genre - complex flight sticks, wheels and pedals, game-pads and, for PC users, the good old mouse & keyboard combo.

Starting out as I did on various 'computer' rather than 'console' platforms I was much more comfortable with mouse & keyboard. The simplicity, connectedness and accuracy of control just seemed to work best. OK, there are times when you just can't seem to find the right key - I'm often to be found mashing away at my keyboard with my little finger, trying to find the melee key before I get knifed or beat down in lunchtime Call of Duty sessions, but on the whole it works really well.

When I started playing consoles I had to make the transition to dual analogue thumb-sticks. It wasn't an easy I can assure you: I always found myself 'over-steering', wildly swinging from side to side trying to get a bead on a Halo opponent, only to find that he could leap through the air, and kill me with a head-shot with ease. But, practice makes perfect (well - adequate anyway) and I'm not too bad now - I'll never be MVP, I'll leave that to the 14 year-olds high on coke & hormones, but I'm not totally owned every time I play.

Get a family guide to gambling games with the roulette glossary from CasinoBonus!

Then, along came the Wii with its revolutionary controller and here was another control method to get used to. OK, it was great and just right for certain types of games, the Wii Sports was certainly a fitting showcase for it. Golf - great, Tennis - perfect, but for FPS I'm not so sure. I have played World at War on it and it works pretty well I must say - but it doesn't have the natural feel of the keyboard/mouse or the gamepad, and having to hold it up to aim would always give me a sore arm after a while.

So for FPS style games it's a toss-up between mouse/keyboard and gamepad - and that will be defined by the platform you play on. PC Gamers will always use mouse/keyboard for the speed and accuracy of aiming it gives. Not wanting to start any flame wars, but if you could put a top-notch PC gamer against a console one and I'm pretty sure the PC Gamer will come out top: assuming there isn't too much aim-assist going on for the console version. But while console gamers use the same controllers it at least creates a level playing field.

If you are an FPS nut... it may suit you

That is until devices like the FRAGnStein mouse/controller set started to make an appearance. Comprising a laser mouse with several programmable buttons and a Nun-chuck-like device with a further six buttons, it aims to give PS3 players the edge when it comes to getting their shot in first. The kit feels really well made - it's nice and solid, with the single AA battery in each controller adding to the weighty feel.

The 'grip' or 'Nun-chuck' controller feels comfortable in the hand, with nicely rounded edges. But one thing immediately springs to mind. How am I going to use a mouse when I'm sat on my couch? The only way you can really do it is to get yourself a little lap table or something similar to run the mouse on. Will people really want to do this? I suppose if you are an FPS nut, desperate to get a little edge on other players, or someone who has come from the PC and just can't get the hang of the gamepad then it may suit you, but I'm not really convinced.

The FRAGnStein Wireless Laser Mouse is an interesting proposition, and like any new controller one that will take a while to get used to.

You can of course use the FRAGnStein Wireless Laser Mouse on a PC as well but I don't think anyone would buy it just for that purpose. One nice thing though is that you can hook your PC up to your big-screen TV and play from the comfort of your armchair (with lap table or course!). I also couldn't find any pre-made profiles for PC games which would have been nice. Maybe these will start appearing after time.

The FRAGnStein Wireless Laser Mouse is an interesting proposition, and like any new controller one that will take a while to get used to. The main challenge here is that it has to be accommodated by existing games as it isn't packed in with a new console like the Wii-mote. But that aside, I welcome any new technology that broadens the number of ways I can dial in those head-shots.

You can support Simon by buying FRAGnStein Wireless Laser Mouse