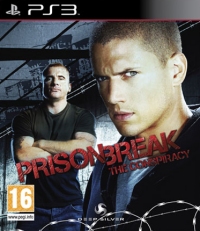 Other GamePeople columnists have reviewed this from their perspective - huh?:
Considered Gamer (PS3) 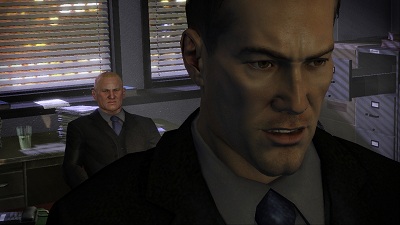 Prison Break ticks the technical boxes but fails to find the spark of game play to really make it sing. You need a big love of the series to carry you through this game.

Prison Break: Conspiracy kicked off with a well realized cut scene taking place during the bus ride into Fox River State Penitentiary. From there though, almost everything else that happened felt like a badly executed attempt to include too many genres and mechanics, leaving me unable to enjoy large sections of the game.

Based on events that take place during the first season of the popular US show, Prison Break takes the decision to give you the role of a new character instead of one of the established cast. It tells a new story without impacting the original plot, that still offers moments that are fresh for fans of the show.

This could have been an inspired move on their part had my interactions with the stars been less fleeting and allowed me to take a greater part in existing plot elements. Instead, playing as company man Tom Paxton, I felt like a voyeur catching brief glances and snatches of conversation that might have made my prison field-trip more rewarding. Paxton is planted in the jail as an inmate to find out exactly how Michael Schofield plans to spring his brother.

The problems are not just confined to the plot, mechanical inadequacies hobble thins as much as the storytelling. Game play, which is centred on the prison's exercise yard, is where Paxton picks up the missions that will curry favour with the various protagonists and develop the story.

These are invariably dull fetch quests, but Zootfly have tried to add variety by adding several types of play styles. But in the main they poorly delivered and frustrating to play. As you might expect, for a game based in a prison, much of the time you will be using stealth to move about. In this case, the clues as to how visible you are unreliable and this is coupled with very uneven checkpoints. At times it felt like I was playing a game from an earlier generation as I repeated the same section over and over again, never quite sure where I was going wrong. Without the option of combat when you're seen, you have no choice but to complete the level as the designer intended, robbing the game of the exhilaration of similar stealth based games.

The many mechanical inadequacies hobble the game more severely than the storytelling.

At other times, you are required to scale drainpipes, moving around the levels like a stilted acrobat - luckily everything that can be climbed is conveniently coloured yellow. This might avoid the occasional wrong turn, but again, the designer has decided how you're going to navigate so it's just a case of pressing buttons. I like to have signposts in my games, but the occasional fork on my journey adds spice to the main course.

Then there are the quick time events, which are amongst the most poorly implemented I've seen. Not only is the arrival of the timed button pressing not telegraphed, but they often require furious hammering of a one button, before switching to another. That switch is incredibly difficult to judge, leading to much swearing, forcing me to start the sequence from the beginning. This artificial lengthening of the game is never welcome and completely unnecessary as Prison Break already lasts as long as its story needs to. .

Feeling like a waste of both mine and the developer's time

To make things appear slightly less linear, the exercise yard has some activities that purport to give you in game advantages. Use of a punch bag is supposed to improve your combat effectiveness, whilst taking part in illegal fights gives you currency. None of these mini-games actually made any difference to my experience, other than feeling like a waste of both mine and the developer's time.

Once finished with the single player mode, the only other distraction is the local multiplayer combat, which presents a side-on view as two characters slug it out in an embarrassingly simplistic fighter. Two buttons and a lack of combos do not make a compelling fighting game and something else that should have been left on the drawing board.

Prison Break is a game that is hard to recommend to fans and as a non-fan, I was just happy to see the end, so that I could move on to something that didn't punish with poorly realised execution.

You can support Simon by buying Prison Break The Conspiracy