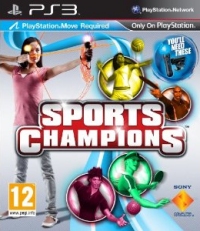 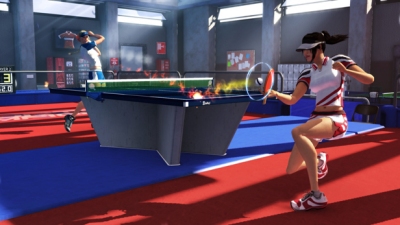 Sports Champions is all about location rather than movement. When it uses Move's unique location technology for Table Tennis it totally outshines the Wii. But when other sports revert to tilt and waggle it becomes all a bit too familiar.

Sports Champions has a difficult job. Not only does it need to be a solid game in its own right, but it also has to show technical prowess with Sony's new Move controllers.

If you haven't already seen the game - it's being pushed hard on the High Street and Bus Stops of most UK cities - it is a collection of sporting games a little like Wii-Sports Resort. It offers Boule, Table Tennis, Disc Golf, Archery and Sword Fighting, a collection of games that cherry pick the best of Wii-Sports' line up.

But where Wii-Sports always felt a bit under developed in terms of being an ongoing videogame that would grow with you, Sports Champions offers an experience with much more stretch. Things start of nice and easy with the obligatory tutorial videos and safety announcements, but soon start to tax even hard core players.

The game is technically impressive. Sit it next to the Wii and you are instantly aware how much extra visual fidelity you have on the PlayStation 3. Each sport takes place in rich environments with fantastic views and realistic opponents.

But the real meat of the game is, of course, in the motion controls. And it's here that Sports Champions becomes most promising. In fact the term motion controls undersells what's on offer here. Whereas the Wii is indeed all about a waggle motion, PlayStation move is as much about placement and space as it is about gestures.

Many of the games in Sports Champions suffer from this misconception - simply applying waggle-like controls to their activities much like Wii-Sports. The aiming in Archery takes a small step into fresh territory, letting you use two pointing devices and taking advantage of the PlayStation Eye's tracking.

Here it is tangibly easier to keep your targeting cursor on the screen compared to the immensely fiddly Wii-mote pointing. At the same time though, Move's pointing feels a little slower to respond compared to the snappy hand on the Wii.

Sony use almost reverse technology compared to Nintendo here. The Wii essentially places a camera in the controller to detect the position of the IR Bar. But the PS3 uses a glowing blob on the end of their controller to enable the PlayStation Eye to detect it - and then combines this with gyroscope information to determine where you are pointing.

It may be this extra complexity that is creating the lag, but assuming this can be solved in software, a pointing solution that settles somewhere between the two extremes would be ideal.

The shining light for Sports Champions (and for Move in general) is the Table Tennis game. It expertly uses Move's depth perception to radically alter how the game plays and feels. If you want to go out wide to return a shot you simply move to that part of the room in real life. If you want more time to apply just the right amount of spin on a deep shot you can instinctively step back. If you need to get in close for a drop shot you can lunge towards the screen.

While Wii-Sports Resort may still have the edge on a sense of physical connection between ball and bat, this elegant solution to player movement makes it hard to think about going back and playing the Wii version - where you always wished they had let you plug in a Wii-mote to run around the table.

This leaves you to concentrate on the direction spin and weight of your shots. Here too the location technology comes up trumps. Whereas on the Wii you would sometimes miss gentle shots because they hadn't triggered, with Move you can simply hold your bat up with no movement and just let the ball hit it. It really is a game changing experience.

With this being such a success it's a shame that the other activities don't make such good use of it. In fact the Boule, Disc Golf and Beach Volleyball really could have been done on the Wii - and probably have a few times over.

The Sword Fighting is a nice addition and certainly add more grunt to proceedings. But there's still a nagging feeling that it lacks the solidity and sense of connection of Wii-Sports Sword fighting.

For all the enhanced visuals, it's the activities that really make use of Move's location technology that make sense and are the most fun to play. This is as true now as it was for the Wii. Whether there's the will and the market to drive developers to really deliver on this, only time will tell. In the meantime Sports Champions - and Table Tennis in particular - is more than enough reason to be excited about what is to come.

You can support Simon by buying Sports Champions