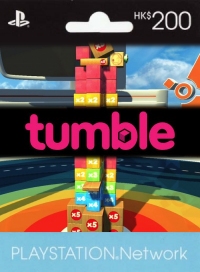 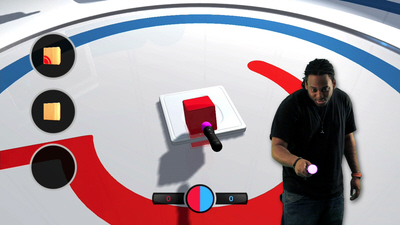 Tumble for PlayStation 3 Move is a rare must-have launch game. It's a huge success on both a technical and game play terms. The fact that it is also an inexpensive downloadable title should encourage you to try out this spatial puzzler.

Since we were kids the desire to place bricks one on top of another has seemed almost instinctual. Supermassive Games on this compulsion by offering a chance to not only build towers, but also use the Move controller in lots of clever and interesting ways.

At its simplest, Tumble asks you to stack blocks to finish each the level. But along the way it ups the challenge by using a variety of materials like plastic and glass that each have different weights and levels of friction to deal with. This is translated intuitively as you pick up and manipulate each block and find that weight is translated to inertia as you move the controller.

Blocks also come in different shapes, so in order to build high you need to place the largest and heaviest blocks at the bottom.

The precision and depth sensing of the PlayStation Move controller coupled with the force feedback makes this simple mechanic a real joy. To be honest I could have spent hours just trying to build the biggest tower.

Whilst Tumble lacks the tactile feedback you would have in the real world, the fact that you don't have to clean up afterwards more than compensates for that loss. Although there still remains the question of a grown man stacking coloured blocks to deal with.

Building is just the start in Tumble though because there are a "stack" of other modes to entertain you.

Building is just the start in Tumble though. There are a "stack" of other modes to entertain you. Some are variations, such as placing as many blocks as possible on a platform without any falling off, while others break convention and introduce explosives to launch blocks through the air to hit targets.

My favourite asks you to place mirrors and coloured filters to direct a laser beam, which was reminiscent of the recent Portal 2 videos. I suspect that the puzzles in Valve's game will be stiffer mental tests, but it still felt satisfying to control the progress of the coloured beam.

If you get bored of the single player game, a rather compelling multiplayer experience challenges you to take turns to place blocks to build the highest tower. Points are scored for each centimetre of height you add, but you lose points for toppling the tower. This does mean that it's almost impossible to win if you do send it crashing, but also adds the classic risk/ reward element. The addition of alcohol to proceeding just emphasises the sensitivity of the controller, but doesn't diminish how much fun it is.

Whilst certainly impossible without the technology, Tumble succeeds because of great game design, from the beautifully clean presentation, to the perfectly balanced challenge in each level.

Whilst I love the precise control offered by the Move controller when manipulating blocks, improvements could have been made elsewhere - such as the ability to move the camera. This is handled by pointing the controller at onscreen arrows, which is unfortunately very imprecise. The addition of optional support for the Navigation controller would have removed this as a problem, leaving me to revel in my millimetre perfect placing of blocks.

Tumble could be viewed as just a technical demo for Move and in that sense it makes a great case for Sony's technology by giving you experiences that would be difficult to replicate on Wii and impossible using Kinect.

Tumble does more than this though, by providing a varied playground in which to express the human desire to build towers to the heavens and. Even when you've finished building high there are still further medals to be won on each level and as such I kept going back to try and unlock everything.

Whilst certainly impossible without the technology, Tumble succeeds because of great game design, from the beautifully clean presentation, to the perfectly balanced challenge in each level. The menus hint at new downloadable levels and Tech Gamer will be eagerly downloading them when they are released.

You can support Simon by buying Tumble