Other GamePeople columnists have reviewed this from their perspective - huh?:
Frugal Gamer (PSP) 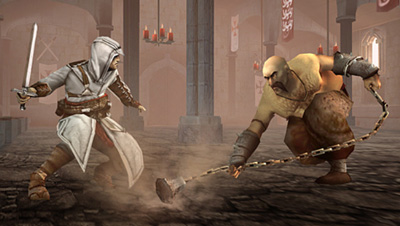 Assassin's Creed comes to the PSP complete with an open world, pakour moves and of course Assassins. Set bet, set between the PS3, 360 and PC Assassin's Creed 1 and 2, Assassin's Creed Bloodlines aims to answer remaining questions. While it delivers a smooth flowing visual, the game is ultimately hampered by players memory of the big console Assassin's Creed games, and awareness of compromises taken here..

Set straight after Assassin's Creed, Altair has chased the Templar's from the Holy Land, pursing them to Cyprus where he learns they're in search of another strange artifact, the Archive. Driven only by his inquisitive nature Altair begins to take down the remaining Templars in hopes of discovering their true intention with this new artifact.

I was a big fan of the first Assassin's Creed game on both 360 and PS3, and was waiting for a sequel to what I thought was an enjoyable game. But when they announced Assassin's Creed: Bloodlines for the PlayStation Portable I was a little nervous of how it might turn out. Wondering how the PSP could even possibly compete against its bigger brother.

Bloodlines looks like it a good PlayStation One game, which allows some technically stunning draw distances on the diminutive hardware.

The short answer is that I'm disappointed in it although the game feels like it was let down by the hardware rather than the game mechanics. Bloodlines follows the game play of Assassin's Creed down to a tee, even having a few missions that repeat. There are only four variations; Interrogation, Delivering Mail, Collecting an Item and Saving an Citizen, although the scenario is always slightly different.

You can no longer pick-pocket people, and the ability to assassinate someone while you're above them has been remove. I could live with these compromises, but they also removed the core assassinations. Assassin's Creed's target assassinations and free-running like a mad man for safety was what kept me locked to the original. But in Bloodlines this becomes more like a traditional boss battle.

These are hard technical choices for the developer.

Visually, Bloodlines looks like it a good PlayStation One game, which allows some technically stunning draw distances on the diminutive hardware. However the limitations of the PSP still hold things back - each city has had to be cut into four sections. This again detracts from the free-running open world play I loved of the original. You can't pakor you way from one end to the other, instead you have to drop down to street level to go to the next area.

These are hard technical choices for the developer. And by sacrificing level size, number of inhabitants and visual fidelity they have kept the frame rate and movement high. Although still a very enjoyable game, the game feels a little restricted by the PSP hardware. If you can forget the 360 and PS3 experience then Assassin's Creed Bloodlines offers some great game play with appropriately shorter levels for portable gaming. But for me, I'm simply to taken with its older sibling to spend all that much time here.


You can support Simon by buying Assassin's Creed: Bloodlines