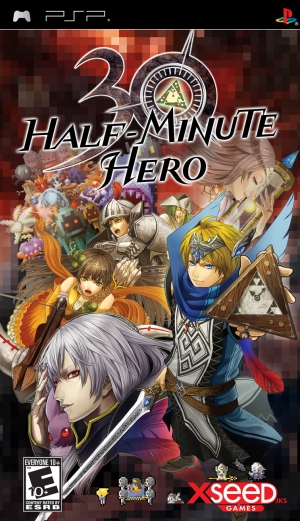 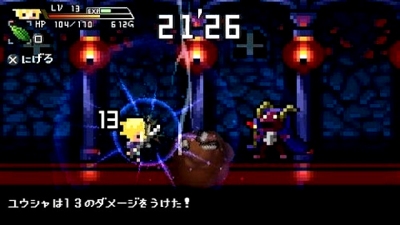 Half-minute Hero on PSP is a frantic little game of three parts - each one having 40 missions that can be completed in just 30 seconds. Those that can revel in games that are simply fun, funny and entertaining and aren't put off by geeky gamer in jokes will have a blast here. It's a technical marvel that so much gameplay has been crammed into so short a playtime.

Half-minute Hero introduces us to a world of many, many stories. As the name implies you take the role of a half-minute hero, from the beginning you have three to choose from. Each has distinct gameplay yet there is an overarching theme that slowly plays out as you progress. The three main campaigns are: Hero 30, Evil Lord 30 and Princess 30.

Hero 30 parodies RolePlay Games; each mission has you playing a sequel to the previous where in 30 seconds you must get the ultimate weapon, level up and save the world. Evil Lord 30 pits you in search of your rival who has turned your darling lover into a bat. And Princess 30 has you playing, well the name gives it away, a Princess who's trying to find a cure for her ill farther in a shoot 'em up gameplay.

While the name of the game implies it'll take 30 seconds to complete each mission it could in fact take longer as the Goddess of Time allows you to rewind time back, at a cost obviously, to give you more time to complete each mission. This is an interesting technical twist not a million miles away from Braid on 360 and its ingenious time-based platform gaming.

At one point I was so into the game on the bus home from Uni I missed my stop twice.

Now while this is perfect on the go, it can be hard to put down as it get's addictive very fast. At one point I was so into the game on the bus home from Uni I missed my stop twice. I was a little annoyed but it did give me a nice tour of the city in which I live to a backdrop of intense, lip biting 'am I going to make it' gameplay and awesome soundtrack. By the time I got home I managed to unlock two more hero campaigns and Knight 30. Knight 30 is a simple escort game, with you protecting a powerful mage as he casts a spell that takes 30 seconds to cast.

Once I got back my housemates decided to challenge me to a game, seeing who can complete each level the fastest using the game's ad hoc multiplayer support. Out of the six available campaigns we stuck mostly with Hero30 and Princess 30 as they offer the most fun, with Hero 30's thinking of how to get to the enemy the quickest and quick frantic level grinding and Princess 30's just frantic/insane gameplay of shoot everything and make a quick return to the castle. We ended up playing it for hours, hence why this review is a day late.

It never takes its self too serious, and it's always a lot of quirky one-liner fun

As well as these various technical achievements the game also has a sense of humour - albeit a geeky hardcore gamer one. Its naive characters and Evil Lords that plans to 'abominate the castle' rather than dominate it, as well as industry in jokes like LOLCats espousing the infamous 'All your base are belong to us. Move Zig'. Then of course there's the Goddess of Times' greed for cash which was how the whole race/battle began with me walking into the house laughing my head off to what the Goddess just said. Throughout the game it'll just make you laugh and put a smile on your face.

If you've been looking for a good RPG to play for some time on the PlayStation Portable, but would love to complete it within say 30 seconds, than Half-minute Hero PSP is your game. It never takes its self too serious, and it's always a lot of quirky one-liner fun. If you have a PSP and don't have this game then you're doing yourself a miss injustice.


You can support Simon by buying Half-minute Hero