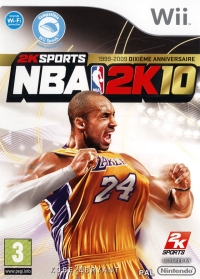 NBA 2K10 brings the full basketball season to the Wii. But unlike the graphical compromises made by FIFA, Grand Slam Tennis and the like, the Wii labours under the misapprehension that it has to be all things to all people. Graphics, gameplay and controls all compete for what turns out to be not enough horsepower in the little white box.

The NBA 2K franchise has for many years been the staple of basketball sims from presentation to gameplay and depth, which make it one of the most acclaimed sport game franchises on the market. With the NBA 2K10 iterations, the series celebrates its 10th anniversary and comes to the Wii for the first time.

NBA 2K10 on the Wii is a title built on technology specifically for Nintendo's console. While it still has the same level of depth as the other console versions, its gameplay and visual presentation both take a turn for the worst. It's almost unplayable with the Wii-mote as you struggle with the complex gameplay from the other versions.

The technical limitations of the Wii's gesture controllers were simply a bridge too far for me. I'm used to the direct quickly responses from the 360 and PS3, this almost seemed like a joke on the Wii. You raise the Wii-mote up to throw the ball, and raise your arms up to block your opponents shot. But often these moves don't trigger.

For examples, I was clear in the open, no opponent in the way, perfect opportunity to score. I swung the Wii-mote up but my player just stood there doing NOTHING. A tried again and this time get him to raise his arms a little but then lower them again. Enough to make me cry as the game goes on without me.

Also forget about hitting a free-throw, as they are practically impossible unless you're willing to spend hours mastering the timing required to dunk the shot. There was a nice touch where you can feel the player's heartbeat through the Wii-mote vibration, but still the technical inaccuracies of controls make it hard to hit.

NBA 2K10 feels like it needs MotionPlus support to add the accuracy and fidelity it so badly needs.

NBA 2K10 feels like it needs MotionPlus support to add the accuracy and fidelity it so badly needs. And although I'm pretty down on the whole experience, I'm also man enough to admit that there are glimmers of hope amongst the frustrations.

In the end I opted for the Classic Controller. This got around the awkward timings and gestures and I could start to see the game I knew and loved on the Wii. The classic control scheme works fine for the most part, but considering the better visual presentation and online capabilities of the PS3 and 360 versions, it'd be pointless to get the Wii version if you own one of the former. You'll also often have trouble passing the ball to targeted players even though most of the actions on court can be achieved by simply pressing a button.

NBA 2K10 often tries to be too realistic for its own good. It's great playing full-length quarters and shooting a realistic percentage and score, but making a high-rated NBA player miss dunks is pretty unforgiving.

Despite their technical tricks, the realistic arenas and player models often give away their low polygon count. There is a thin curtain between this version and the PS2 low poly models. Even the high resolution textures can't quite hide the fidelity on offer. Often in games see well-known players get a better over visual treatment, but every player looks just as bad as the next. Think Max Payne, with a texture for a face, which is totally and utterly unforgiving considering what we've actually seen on the Wii.

By shooting for everything, rather than making compromises in either visuals or controls, NBA 2K10 on Wii simply can't compare to the 360 or PS3 version.

These efforts on the visuals, however misguided, also mean there isn't a lot of horsepower left for the rest of the game. There's no consistent flow to the action as the Wii struggles to deliver AI and camera work with what it has left in the tank.

One nice touch though was NBA Today. This is a great and interesting feature, that allows you to play today's NBA games pulling in event as the Season continues. Jumping into this mode gave me a little buzz of connection to the wider basketball world. It also allows you to incorporate actual NBA statistics into your season and adds a new sense of realism. And the 2K Insider Blog gives feedback about the current season you're playing through.

For all the control and visual foibles, you can't fault 2K Sports at including the depth and modes from the other NBA 2K10 versions. As an effort on the Wii, the NBA 2K series has a lot to make up for. By shooting for everything, rather than making compromises in either visuals or controls, NBA 2K10 on Wii simply can't compare to the 360 or PS3 version.


You can support Simon by buying NBA 2K 10