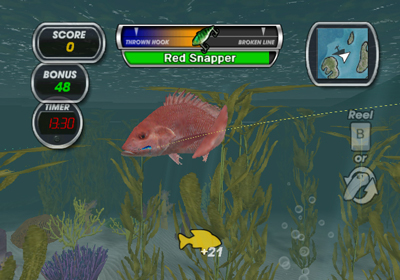 Shimano Xtreme Fishing Wii tries hard to expand video fishing and manages to create some considerable fun along the way. It makes sure you're never bored with its three different singleplayer modes, engaging control system and even adds multiplayer for up to four players. I was impressed with the technique and deliver of the features here - this is the first fishing game I've really enjoyed playing.

Let's be clear, if you don't like fishing then adding a bow and a spear gun to the arsenal of your Wii-mote isn't going to be enough, but as a fishing game Shimano Xtreme Fishing offers a lot more than its competitors.

There a few nitpicks I have with the game such as the music repeating the same song throughout the entire game. This Hill-Billy tribute band is incredibly annoying until you begin to catch fish - only then it'll turn into something that could be called remotely listenable.

the sea-life itself isn't really that detailed, they look nice and I'm sure represent their individual species well but the textures on them look rather basic.

My other bug-bear is how much the game is plastered with advertising. Shimano is the name of an manufacturer of fishing equipment and it's joined by many others that fill the screen with their names at various times. It doesn't interfere with the gameplay but it's still an annoyance.

But that gameplay is what makes the experience so superior. Though other fishing games focus on catching fish with a conventional rod and reel, Shimano Xtreme Fishing let's you go spear and bow fishing. This is the true hook of the game to reel you in with each option having a different style of playing using the Wii remote.

Steering a boat using the nunchuk is easy enough and when you're ready to cast you press Z, selecting a point using the Wii remote and then pressing B. If you've played Zelda it's probably something you've done before, as the mechanics of the casting are easy to pick and the Wii remote is pretty responsive. Playing using the Bow could is the equivalent to shooting fish in a barrel. It's essentially the same style of gameplay as the Rod option except you don't have to worry about shaking the lure or the line breaking. It's probably the easiest and quickest option to get straight into the gameplay and enjoy for a good while.

It's upon capturing the fish I noticed a few things about the game; the sea-life itself isn't really that detailed, they look nice and I'm sure represent their individual species well but the textures on them look rather basic. These are the worst offenders and I'm pretty sure one of the species of fish had textures for eyes.

They do animate nicely and the game runs and responds to your input smoothly with no major technical hiccups except for one bug on the Mayan level. There I managed to clip through a wall and got stuff on the outside of the level, but this only happened once in all my time playing the game. Speaking of environments, one little complaint would be they feel a tad small to really be going scuba diving in. However you'll see a variety of different locations and all presenting some nice detail, just make sure not to get too close as the textures are blurry and pretty terrible up close.

This Hill-Billy tribute band is incredibly annoying until you begin to catch fish - only then it'll turn into something that could be called remotely listenable.

The third and final way to fish is with a spear gun, where you must guide your diver through undersea environments, take aim, and fire the spear for a truly unique fishing experience. But again the same problem arises, which is even more apparent this time, as some fish need multiple hits before you can capture them, especially Sharks.

Yes you read that last part right, Sharks! They feature in all of the underwater areas, turning a somewhat dull moment into a terrific heart -thumping experience. I had a few big fish and seemed to be doing well, suddenly the screen flashed red saying "warning, shark!" Even though arrows pointed my view in the general direction of the Shark it was moving around me and difficult to see. It's nearly impossible not to get drawn into this experience and without hesitation the Jaws theme began to play in my head, heightening the tension.

This is a solid title and I had great fun in certain sections. The multiplayer is exactly the same as the singe-player, with the addition of three friends coming along for the ride - I could see this being a lot of fun if you've got enough Wii-mote. If you're into fishing and you want a family member to get into fishing, this game may help too - at least if you got them to come along with you, they wouldn't feel like a fish out of water (sigh).


You can support Simon by buying Shimano Xtreme Fishing