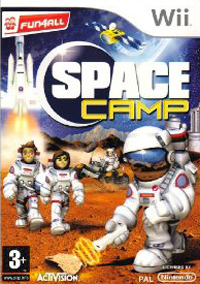 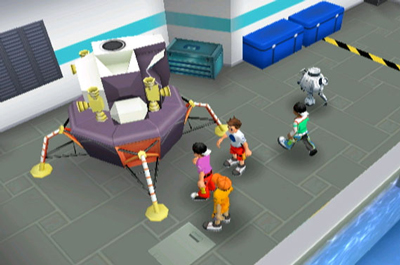 Space Camp for the Wii tries to squeeze an outsized shoe into a tiny Wii-shaped slipper. The result is brutal mismatch between a point and click adventure and a bunch of mini-games. In game development terms this project was always going to struggle beyond what I imagine was committee led pre-dev meetings. Even for those Space Camp fans in the house this is a title best avoided and the money spent on a proper NASA DVD.

Space Camp starts you off as a kid who wants to be an Astronaut - and that's about as deep as the story goes as it seems to only exist to string along a series of mini-games. Yes this is a secret mini-game collection much like Raman's Raving Rabbids but sadly nowhere near as good as that title. Space Camp has a cheesy over the top character named Captain Wiggins, a robot friend named A.R.P. (who seems like a nerdy cousin of Borderlands' own Claptrap but just not as funny) and our hero... nameless young child number 1.

Character design is rather basic with no real detail. Captain Wiggins standing out by being a caricature of a space captain with his massive jaw line and a bunch of stereotypical personality traits. Saying that, all the characters are nicely textured and animated, as are the environments, although you'll see the same animation every time you see these characters speak which doesn't help during the long chats. This often happens between Captain Wiggins, A.R.P. and your character as they tell you how to play a mini game you've already played several times.

Environments are quite big but are bland with no real detail and with nothing really in them of interest except for the objects that you can interact with.

Environments are quite big but are bland with no real detail and with nothing really in them of interest except for the objects that you can interact with. These will either start a mini game or give you some space-related facts. For example, if you click on a spacesuit it tell you what sort of spacesuits NASA currently use - hardly relevant to the game and barely interesting as a piece of trivia.

Mini-games are basic too, often having a confusing control scheme or some odd design choice that almost makes that mini-game unplayable. I noticed this within the first ten minutes as the game asked me to all mini-games within Space Camp before moving on. Two games that demonstrate this perfectly are Basketball and putting out cockpit fires.

First the Basketball as you hold A, which will power up your shot, move the Wii-mote forward and release A, which will then throw it. You get points by scoring it in the net that slowly moves from far back to quite close in a First Person view. However the mini-game doesn't have a power bar telling you how much power you have in your shot, so you have no real way of knowing how much power you're putting into your shot. And with the game needing you to score over 42 to continue the best I was getting was nine. Instead I decided to spam the throw action as much as possible and only this got me the score I needed to progress. I can't imagine how a young kid would get past it.

This feels like a rushed title, quite possibly the most rushed title I've ever played and I've played a lot of pre-release Beta's on the PC.

The other messed up mini-game was where you needed to use a fire extinguisher to put out fires in the cockpit. This was another oddly made game as you had to aim directly at fires and put them out, while pointing the Wii-mote at the screen. Sounds simple enough until the game starts and you have no aiming reticule at all which lead to a lot of misses and unresponsive controls, as usually I'd be aiming off-screen without realising it.

Technologically, this is possibly the most rushed title I've ever played - and I've played a lot of pre-release Beta's on the PC. It feels like it was an educational game at first but then modified, quite brutally, with a haphazard story and some really badly designed or implemented mini-games. In the end it feels like a truly missed opportunity for some fun space themed mini-game collection and isn't a title I can recommend at all.


You can support Simon by buying Space Camp