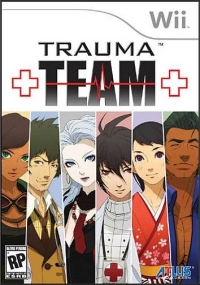 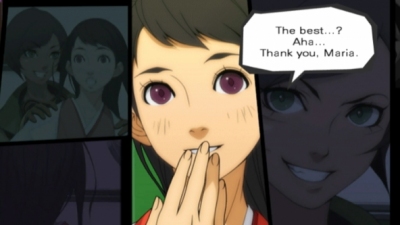 Trauma Team adds medical disciplines and interpersonal ethics to create a new feeling for the series which was in danger of stagnating. By turns, Dr Kildare, House and Doogie Howser, it's technically impressive that Atlus managed to balance the many moving parts so well - sleuthing, operating, investigating, not to mention the various relational shenanigans.

Trauma Team is like an over-the-top television drama where both blood and exclamation points fly with reckless abandon. Like Trauma Centre before you're still slicing organs, excising polyps and drilling bones with Wii-mote precision, but all of this is nowhere near as dramatic as the lives of the Trauma Team's doctors.

Trauma Centre Wii, made perfect use of the Wii's technically challenging controls. Tweaking, poking, rubbing, pulling and easing was executed with Wii-mote accomplishment that escaped other developers. But this was limited to the operating theatre. Trauma Team takes the action to six fields of medicine: endoscopy, orthopaedics, forensics, diagnostics, emergency response as well as the original surgery.

There's a lot to take in, especially with the interplay between these fields. Patients move through the different disciplines as their injuries and diseases dictate. Having been originally been treated on-site as the emergency response character, they'll then appear back at the hospital getting their broken bones fixed by the orthopaedic surgeon.

While each character and medical field represents its own standalone game path, you'll see that both the stories and medicine overlap, making for a game experience that is far more engaging. The sense of teamwork echoed party play more common in adventure games. At times the challenge was more how to make them get along rather than a particular medical procedure.

Trauma Team is like an over-the-top television drama where both blood and exclamation points fly with reckless abandon.

Each of the six characters can be selected and played in any order, letting you mix and match disciplines to your liking. You'll progress through several day-in-the-life style episodes for each, all presented with a graphic novel or comic book style.

The varied stories did make me yearn for more variety in game play. Like Trauma Centre there is quite a bit of repetition. Having to dress the same wound over and over for fifteen minutes can drag. Likewise, in the non-surgical fields actions can also wear a little.

From a technical standpoint, Trauma Team works hard to win you over. New players in particular are well catered for with solid, and well narrated, tutorials and introductions. And the storytelling goes a long way towards making this inviting.

While each character and medical field represents its own standalone game path, you'll see that both the stories and medicine overlap.

Interactions are well judged throughout, I really appreciated the handy tool icons that gently guide you along. In-episode characters are also happy to point you toward the next step if you're ever stuck - something I was grateful for during my diagnostics rotation.

If you liked the Trauma Centre games - Under the Knife, Second Opinion or New Blood - this confidently fleshes out that experience. It's unusual for me to highlight narrative structure and storytelling, I usually focus on more technical aspects, but here it contributes significantly to the finished product. Thankfully steering away from being too much of an off screen soap opera, Trauma Team combines personality and technical challenges well.

Even with the low level repetition, and the continued absence of multiplayer, there's so much varied game play and story content in Trauma Team it's easy to recommend it to anyone.

You can support Simon by buying Trauma Team