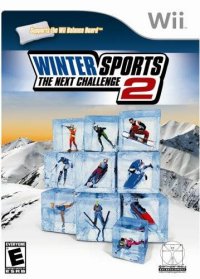 Winter Sports 2 Wii brings minute-long winter sports events but struggles to make sense of complex motion controls. Played on their own or strung together, I was left wanting more from my Wii-mote.

Expect controller waggling and, worse yet, strange motion implementation with prompts applied at random intervals and with little regard for logic. Winter Sports 2: The Next Challenge is a sequel to 2007's Winter Sports: The Ultimate Challenge. You would think the 'ultimate' challenge would supersede all others, but continuity is really the least of this game's problems.

The game offers variations of half-pipe snowboarding, alpine skiing, ski jumping, speed skating, biathlon, bobsleigh, luge, skeleton, figure skating and curling. But like any of the countless mini-game collections on the Wii, Winter Sports 2 is not sure where to invest it's development. Too little investment spread too thin.

The figure skating game, for example, is simply a rhythm action game where you shake the controllers in the indicated direction to perform the routine. It's the same as the dancing mini-game in the first Rayman Raving Rabbids game, only less responsive and not as much fun to play.

From a technical perspective, the game needs to make a connection between controller movement and in game action. But waggling to figure skate feels random at best. I don't remember seeing a figure skater swatting at flies while she executed a spiral, well maybe in Dancing on Ice.

The lack of precision makes it easy to overcompensate.

There are also problems in execution. When the controls do make sense they are hindered by average motion detection. The lack of precision makes it easy to overcompensate and, if you're at all like me, you'll eat lots of snow.

One time I slammed into the side of the skiing course and collided with three consecutive flags before steadying myself long enough to get the next set and, as sure as snow in January, crashed into the last two. Another sessions I found myself airborne, soaring toward the 2D forest and, if not for the game placing me back on the slope, certain tree-induced death.

the commentary didn't help. 'The race seems to be over before it started,' his words dripping with a condescending smile. 'You can't be satisfied with that score.' Not to be outdone in pure obnoxiousness, his broadcasting buddy joined in with a laugh, 'Not unless you're out to make a fool of yourself.' Their cold words stung almost as much as playing this game.

Misses what made Nintendo's groundbreaking game so special - charm, intuitive controls and playability.

Visuals are not the Wii's strong point, and here we find some average third-party graphics. Winter Sports 2 doesn't help things with a mixture of a bland art wrapped in dull colours and environments, 2D crowds and blurry textures make this feel more like a 90's production than something you've just purchased. There's just no spark to the game to make it truly stand out, you'll be better off buying SSX Blur, a launch title for the Wii, which plays better and has a better visual style.

It's a shame Winter Sports 2 isn't a better package. It seems to use Wii-Sports as a template, but misses what made Nintendo's groundbreaking game so special - charm, intuitive controls and playability.

You can support Simon by buying Winter Sports 2: The Next Challenge