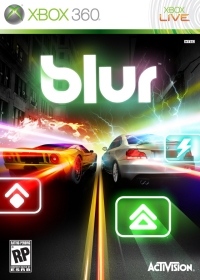 Other GamePeople columnists have reviewed this from their perspective - huh?:
Family Gamer (360)
Scared Gamer (360) 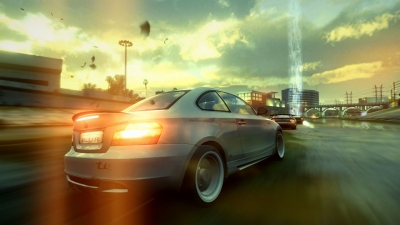 Blur balances crazy Karting fun with real driving. It avoids being random, or boring and delivers a progressive customisable experience that has learnt as much from Modern Warfare and Halo as it has from Mario Kart.

My friends seem to have an insatiable hunger for racing games. We like nothing better than get together for an evening of split screen Karting fun - with the obligatory snacks and drinks of course.

Blur has been a breath of fresh air for us. It seemed that we had been left behind as everyone else started playing online. Our choices for proper four-player racing action were becoming ever more cartoony - and although some of us are quite young, we want explosions rather than bananas.

Blur takes the look and feel of the developer's previous games, Project Gotham Racer, and injects it with the mischievous fun of a Kart racer that we love so much. The driving isn't totally like hard-core simulation games like Forza, Gran Turismo or Grid, but it is hard enough to make a big difference to how you do.

Before you get to grips with the weapons and perks you need to get a handle on the driving. Good use of drift and line around corners, as well as just the right amount of acceleration can make all the difference to your standing.

On top of this is laid the first Karting layer - weapons. Blur offers a set of offensive and defensive weapons that unavoidably equate to Mario Kart attacks. There is of course the Red and Green shell missile attacks, and the Mushroom like boosts as well as Banana skin mines. But as well as this are some nice touches of their own. The lead attack weapon, Blue shell if you are keeping tabs, is a similar aggressive attack on the lead cars - but unlike the blue shell you can avoid it. Again this speaks of Blur's commitment to making this a racing rather than battle game.

The cherry on the top for us was that all the tracks are unlocked for the split screen mode from the start.

The next layer is drawn from Modern Warfare 2. Blur offers what is essentially a perk system so that as you progress through the online multiplayer you can rank up your car and driver. There is plenty of variety - and each of my friends has developed their own powered up cars to match their style of driving. Some go for invisibility specials and defensive boosts while other are all out offence.

This is all rounded off in a lobby system that has learnt a lot from Halo 3. Favourite community race types are available, or you can create your own custom mode. But as I said me and my friends usually just play locally.

Blur has a little bit of everything and I think that's why it's so hard to stop playing.

The cherry on the top for us was that all the tracks are unlocked for the split screen mode from the start. This even beats Mario Kart's insistence that we have to earn the levels we have already paid for when we purchased the game.

We've been playing this every evening for a week and there is no sign of slowing. That alone is a big recommendation I think as we usually jump around all sorts of games. Blur has a little bit of everything and I think that's why it's so hard to stop playing - it's got something for everyone regardless of how you like to play.

You can support Rowan by buying Blur