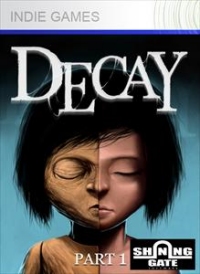 Decay: Part One tackles grown up themes in sometime disturbing ways. Against the teen stereotype though I really enjoyed being treated like a grownup by a game. The experience was compelling, enjoyable even if it was very short.

Decay: Part One is an atmospheric, suspense filled point and click adventure that delivers a mature and mysterious narrative experience. It stands head and shoulders above many of the other titles on the Xbox Indie Marketplace, only marred by its really short playtime.

When I fire up my Xbox 360, I like to scan through the latest offerings on the marketplace, normally I don't take much notice at the Indie game's section as I find the majority of them aren't worth it. But today things were different, I stumbled upon Decay: Part One, a title that I'd heard mentioned before on a couple of my favourite pod casts, so without hesitation I immediately hit the download button.

I sat down with a friend from college and excitedly loaded it up. The game opens with a bloodshot eyeball slowly came into focus. It looked from right to left, before rolling back into it's owners head. I was shocked to discover I was witnessing a suicide, which was a topic I've never really seen explored in a videogame before.

Immediately the tone was set and it became clear to me that Decay wasn't going to pull any punches. I know younger gamers are stereotyped as gun touting violent lovers, but this more measured and mature approach really had me hooked. It is a genuinely dark and disturbing adventure game that's caked in a thick layer of atmosphere. Although it's definitely not something I would let my younger siblings experience.

It plays like a standard point and click, a first-person perspective. You move from location to location picking up pieces of the story as you go. Only this time, the location is a grimy, dimly-lit block of flats that wouldn't look amiss in the town of Silent Hill.

Younger gamers are stereotyped as gun touting violent lovers, but this more measured and mature approach really had me hooked.

For me the strongest element of the Decay is its narrative, which unfolds via a number of newspaper clippings, and mysterious message left around the seedy locale. Each one helps to paint an abstract image of what was actually going on, while at the same time somehow adding further mystery to the proceedings.

Mystery sums up Decay. Throughout the game I found myself constantly asking questions. Who was I? Was I dead? What was going on? It reminded me of a macabre episode of Lost. While younger teens may find this off-putting, it compelled me to play on as I really needed to uncover some answers.

The storyline is complemented perfectly with an ultra-creepy atmosphere and aesthetics. I constantly felt a real sense of uneasiness that continued to build and build right up until the games completion. It was almost as though something was lurking in the shadows, just outside of my field of view. At one point I had to hand the controller to my friend for a couple of minutes, giving myself time to 'cool down', so to speak.

No point and click adventure would be complete without a couple of puzzles. Decay, is no different, throwing a few logical brain-teasers in to the mix. While these are a welcome addition I found them a little to easy to solve and wouldn't mind being stumped for a little longer.

It's definitely not something I would let my younger siblings experience.

It's a real shame that it is so short lived - around 20-30 minutes. Even at a budget price I couldn't help feeling a bit short changed. I'm pretty sure my friend felt the same way, as when the game finished he let out an audible moan, as if to say "is that it?".

Decay: Part One is great for point and click fans, or those with a taste for mature storytelling. While it doesn't feel like a fully realised package, I believe Shining Gate Software have laid down the foundations of what has the potential to be a great series.

You can support Rowan by buying Decay Part One