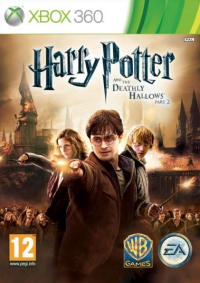 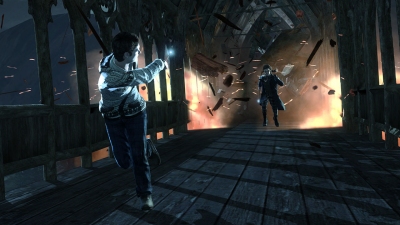 Harry Potter and The Deathly Hallows Part 2 is a solid run and gun game where spells replace firepower. However beyond this the story and multiplayer features have fallen by the wayside.

I'm not the biggest Harry Potter fan but I did enjoy reading the books when I was a younger. The films never quite seemed to live up to what I imagined the book to be like and after watching a few I gave up with them.

This means that I also avoided the various Harry Potter videogames as well, until Harry Potter Lego that is. I enjoyed that a lot on the DS and I'm not looking for the second Lego incarnation of Rollin's world this Christmas. Although I wasn't all that excited about Harry Potter And The Deathly Hallows - Part 2, a friend bought it for me as a birthday present so I thought I should at least give it a good go.

And actually, it's got me kind of hooked. I've got something of a secret fetish for Gears of War. I know, I'm a girl, I'm not supposed to like those sorts of games. Well it wasn't until just recently that I was old enough to even play it, but when I did I really liked the different tactics you needed to use to progress and the great looking graphics.

To cut a long story short, most of The Deathly Hallows Part 2 is a cover-based shooter not a million miles away from Gears. You work your way from cover to cover trying to blast away the enemy with your spells while trying not to get caught. I caught a glimpse of the first Deathly Hallows game and by comparison (I must underline I didn't play it very much) this one is much better.

Of course, along the way the story of the film is told, but compare these to even a cursory reading of the book and it's soon apparent that neither film or game have the story telling ability of a good paperback -- not in this case at least. The biggest problem is that it jumps around quite a bit and missed big parts of the story. If you haven't read the book or seen the film beforehand it would be very hard to follow.

Regardless, I was more than happy to get my Gears of War hit without having to be chastised by people who saw me playing. Deathly Hallows Part 2 is apparently a more appropriate shooter for someone of the more sensitive sex or fairer race. As you progress you get more spells that seem to be the faintest cover for gun-centric firepower I've seen. Expulso is essentially a machine gun, Petrificus Totalus a zoom enabled sniper rifle and the impressive Impedementia a rocket launcher.

Deathly Hallows Part 2 works best when it focuses more in innovating around its magical source material, rather than copying popular mainstream games like Gears. In fact a stand out element for me (one I'd like to see incorporated back into hardcore shooters - not that I play them of course) is the teleportation spell. This means you can jump between different cover sports. This not only looks great, but introduces all sorts of new tactics. If only there was a multiplayer or co-operative mode you could have great fun materialising next to your comrades or enemies.

I know that the previous Harry Potter game came out just when Kinect and Move had launched and felt it necessary to include control schemes for these gesture and motion controllers. This time around the Kinect mode is absent and I think the game is better for it. Rather than worrying about triggering the right spell gesture you can get on with enjoying the gameplay itself.

I know the Wii and PlayStation Move versions still support gestures, but they don't suffer from the same lag as Kinect seems to and therefore cause less of a problem. They also provide the ability to opt for button presses in place of gestures as well, again getting around the problem for those of us who aren't all that taken by waggling or waving.

While many will deride The Deathly Hallows Part 2 for not breaking the mould or creating an innovative way to play, there is actually a lot of fun to be had here. A lot of people will look down on the comparison with Gears of War, when there are some excellent new additions to the run and gun (spell) gameplay -- in particular the teleportation spells.

If you have a firm grip of the story and are looking for a way to extend your Harry Potter experience now that you've seen the final film and read the last book, The Deathly Hallows Part 2 is a very good way to do that.

If nothing else, this game will make you smile.