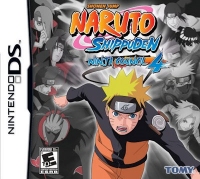 Naruto Shippuden: Ninja Council 4 is a 2D side-scrolling action platformer for the Nintendo DS. It's based on the anime cartoon of the same name. I've never even seen a clip of the television show, but if the game is any indication of quality, I fully intend to keep it that way.

I didn't complete Naruto Shippuden but not for lack of trying. I found the experience simply too difficult and frustrating. I really would have liked to have seen the game through to it's completion, but I literally couldn't progress any further.

Before you think I simply couldn't cut the mustard, I really enjoy a challenging experience. In fact, I play most games on hard mode straight of the bat and consider myself to be an experienced teen game. However, with Naruto Shippuden I think I found my breaking point.

I don't mind replaying sections of a game over and over again, as long I know that I'm failing segments because of my own lack of skill - that my actions are the reason why I've fallen down the same abyss for the 17th time in row. The problem with Naruto is that nine times out of ten, I felt as though I was failing because of the game's level design and loose mechanics.

For a game that relies heavily on platforming, the levels themselves were pretty shoddy. Making tightly timed jumps can be extremely tough, but it's made harder by the environment that psychically blocks your movement in some circumstances. Add to this a limited view of the level and you spend a lot of time making blind leaps into the unknown, desperately praying that the God of platforming will have the common decency to place a solid surface beneath your feet.

I let a few of my mates have a play of Naruto, just to make sure I wasn't terrible at the game.

While the control scheme is simple, it's not very responsive. On some occasions it seemed as if the controls would suddenly stop working. Many times I found myself plummet to my death when the they seemed to give up on acknowledging my input.

This frustration was elevated by the lack of checkpoints. In fact, I think that if these were included the game would become somewhat palatable. But, as it stands, dying means you are sent back to the start of the chapter, even if you managed to make right to the end of level boss. Which, as you can imagine quickly becomes more than a little tedious and resulted in me undergoing some Bruce Banner-esque transformations.

I like to take my DS along for the coach trip to college every weekday. This week I took the time to let a few of my mates have a play of Naruto, just to make sure I wasn't terrible at the game. Every single of one them played for a couple of minutes before handing it back to me feeling totally unimpressed, which only further re-assured my feelings on the game.

Naruto Shippuden wouldn't look amiss in the early nineties - it looks and plays exactly like a SNES era game. While this isn't a problem per se, the developers seem to have forgotten that games and their mechanics have evolved since then. I love a bit of nostalgia as much as the next guy but if I wanted to get my retro fix, I'd go back and play one of the classics, not some cheap imitation.

I guess it's aimed at the pre-teen market and Naruto fans.

Naruto Shippuden: Ninja Council 4 is one of the most frustratingly handheld games I have played. I really don't know who this game is aimed at. I guess it's aimed at the pre-teen market and Naruto fans. But if that is the case, why have it so infuriatingly hard? I wouldn't recommend it to my younger siblings or college buddies. In short, I think fans of Naruto and non-fans alike should really avoid this title like the plague.

You can support Rowan by buying Naruto Shippuden Ninja Council 4