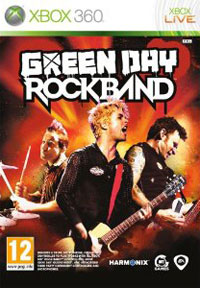 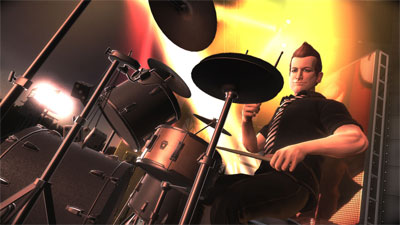 Green Day: Rock Band adds one of rock's greatest modern bands to the musical gaming formula. With 47 tracks from the group's history including the best-selling Dookie album, this is a must for fans like me and my friends - we like our rhythm games frenetic and energetic. You'd need to appreciate Green Day to really love it, but still this is Rock Band at its greatest.

I've been a fan of Green Day for as long as I can remember and the wait for them to have a music game all to themselves seemed a ridiculous dream at times. But Rock Band has crafted a cool fan-driven experience that kept me and my friends playing for many nights in a row.

The most obvious thing to say about this latest version of Rock Band is that if you're a fan of Green Day, like me, then this is an essential purchase. Not just because it contains 47 songs from their back-catalogue (no b-side cover bands a la Guitar Hero here), but because it has the whole album Dookie.

Having Dookie on the set-list was make or break for us - it's Green Day's best album by a long way and the one I was most psyched about. The other albums are all post-Dookie, which for me wasn't a problem but a couple of my (admittedly) older friends were pretty disappointed to find albums like Kerplunk or 39/Smooth absent.

Just as with last year's The Beatles: Rock Band, the visuals and structure of the game follows the band through the years with all the group members changing appearance from the Gilman Street beginning to the more recent American Idiot album style, complete with the right outfits and eyeliner.

This works great, even a little better than the Beatles version and miles superior to the Guitar Hero offerings. The reason why I think it works is because of the graphics. The modern and colourful nature of the Rock Band engine is much more effective at portraying a band like Green Day than the austere nature of The Beatles.

My friends and I found a couple of glaring errors with how the band is portrayed though. It's great to see a visual depiction of how far the band has come since their grunge-rock origins, having them playing Dookie in a dive bar setting is all wrong considering how popular that album was. Equally, the American Idiot era has songs from other albums before then that make no sense being portrayed in that fashion. These might seem like little niggles but it made the experience a little less compelling than I hoped it would be.

The challenge of playing bass or drums is really fun when you're frenetically beating your way through the hits from Nimrod, Insomniac and Warning.

In all honesty though, we didn't get Green Day: Rock Band to look at Billy Joe's eyeliner or marvel at the staging - it's all about how the songs are to play. In this regard Rock Band gave a really cool performance. The whole point of Green Day's music to me is how energetic the performance is and this translates into some epic tracks when playing on the higher difficulty settings.

None of them were stupidly difficult and the challenge of playing bass or drums is really fun when you're frenetically beating your way through the hits from Nimrod, Insomniac and Warning.

Other features include the unlockable photos and videos of the group which basically act like a fragmented documentary about the band. These were ok but none of us found anything new or interesting to keep us compelled in going back to view more. Perhaps the best feature of Green Day is the option to import all 47 songs into either Rock Band 1, 2 or the soon-to-be released Rock Band 3. It's a feature that Rock Band: Beatles didn't have and having all these great tracks available in the main Rock Band game makes having a party that much easier without having to swap discs all the time.

I don't see why the tracks need to be censored though. The whole point of Green Day is they're edgy. They're angry and pissed-off about stuff so a lot of their songs have cursing in them. That's the appeal of the band to me - that they know what it's like growing up. The edited versions of these songs are just toothless. Funny thing though - the game doesn't penalise you if you sing the original lyrics so there's some comfort to be had for turning this up loud and belting out songs how they were meant to be sung.

Green Day: Rock Band is on Xbox 360, Wii and PS3 and really fulfils my dream for an exclusive version. It has a few issues here and there with consistency but the overall experience is superb. It gives Green Day the kind of valid presence in the music game genre that fans have been waiting for and rocking out with three other friends is the incredible experience it should be.

You can support Rowan by buying Green Day: Rock Band