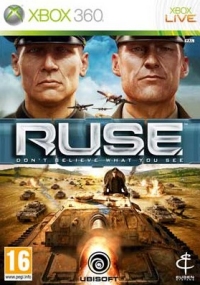 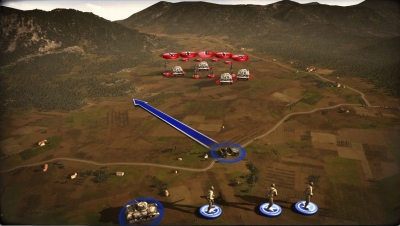 RUSE works its angles well, but succeeds not because of tactical or motion control novelties but because it is a solid and challenging game. It proves that Real Time Strategies can work well on a console.

My mates all insist that your need to play strategy games on the PC. But since Halo Wars and Supreme Commander 2 I've found I almost prefer commanding my troops with dual sticks rather than the mouse.

RUSE seals the deal for me. With just a couple of control sticks and buttons I can easily get my orders implemented by all manner of units. The left stick controls the currently selected units while the right zooms in and out.

It's this zoom that makes all the difference to this World War II game. While most Real Time Strategy games I've played offer a few levels of magnification, RUSE lets you dial right back to see the whole battlefield. It's really very impressive.

From here you can zoom into specific areas, or go right in for a close up view of individual units. It's great because it's simple. Even taking into account the helpful tutorial I was up and running with RUSE much quicker than other RTS games on console.

Combine all this with a visual engine that looks fantastic and I had more than enough firepower to persuade most of my friends that this was worth a look.

But more than these gimmicks, it was the nuts and bolts of this challenge I was most excited about.

But more than these gimmicks, it was the nuts and bolts of this challenge I was most excited about. Even on easy RUSE is surprisingly difficult - in a good way. You can't cut corners or find set strategies you can roll out every time. Every unit needs to be used appropriately and with tactics to match their strengths.

You start off as General Sheridan who needs to discover the identity of a mysterious spy who's been leaking information. Soon after you are taken back in time to Tunisia 1942 and start to find out more about Sheridan's early years learning his field-craft.

By the time I'd finished RUSE I had not only had a great time, but convinced most of the people I play with that an RTS can work very well on a console.

This brings you to the eponymous feature in RUSE. To complete missions you need intelligence and the RUSE system lets you in on encrypted transmissions, send our spies or play tricks on the enemy. While I felt this a little heavy handed at times - and didn't want to always rely on this mechanic - it certainly added an unusual bit of stealth tactics to the usual RTS game play.

By the time I'd finished RUSE I had not only had a great time, but convinced most of the people I play with that an RTS can work very well on a console. And for those still to be convinced there is of course the PS3 Move version of the game that uses the new motion controls to offer a more tactile and analogue way to interact with the game.

You can support Rowan by buying RUSE