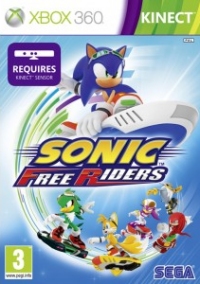 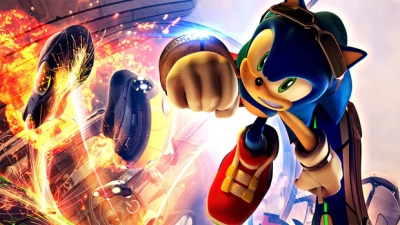 Sonic Free Riders' exuberant racing is better on paper than in practice. There's plenty to enjoy in this ambitious Sonic outing, but the Kinect controls made me miss my good old joypad.

I was pleased to find a game for Kinect that wasn't sporting or dancing focused. Sonic Free Riders lets you jump on some rather Back To The Future style hover boards in a fully featured racing experience. Like Sonic Riders: Zero Gravity (Wii) you use motions to control your ride through a Wipeout style looping circuit, only here you aren't holding anything.

It looks great and all the regular Sonic characters are here to race as or against. The impressive scenery flies past as you lean left and right to steer and there is a real sense of speed as you crouch down or hit the on-track pads to gain an extra boost. Then there are jumps that you have to synchronise with your real-world leaps to maximise height and speed.

Along the way you can collect power-up items. These either give you a boost or slow your opponents down - that much is expected. More unusual though is the way each of these collectibles adds an in-race minigame. It's a little bit like playing Wii-Sports and Mario Kart at the same time.

It's a little bit like playing Wii-Sports and Mario Kart at the same time.

You see, each power-up (Bowling Strike, Tee Shot, Free Throw and Soda Rocket) requires a related motion to trigger them. Trying to pull off a bowling action while steering the hover board at the same time and preparing for an on-rushing jump is no mean feat.

I found that there was just too much going on for me to really nail the racing. Or I would find a good racing groove but forget to trigger the items I'd collected.

This does get better with time, as your muscles get used to different movements required, but I also found that Kinect struggled to consistently notice my movements. It meant I lost confidence in the controller's ability to really see what I was doing - which is strange because other games have been spot on in this respect.

I did have fun with Sonic Free Riders, but in the end it was short lived.

While Sonic Free Riders isn't trying to be an out-and-out snowboarding experience like CrossBoard 7, it could still have benefited by adopting its deft Kinect steering.

I did have fun with Sonic Free Riders, but in the end it was pretty short lived. The multiplayer added a bit more interest when a friend came over, but there too the awkward controls eventually got the better of us.

It was nice to see a Sonic game on Kinect, but a shame the experience didn't really hold up for very long.

You can support Rowan by buying Sonic Free Riders