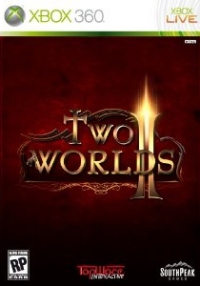 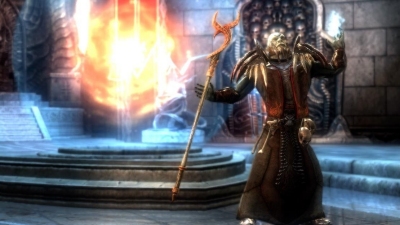 Two Worlds 2 wraps up loot collecting with intelligent crafting and a world that looks engaging. Not as robust as Oblivion or Fallout New Vegas, but no less captivating once you fall under its spell.

Two Worlds 2 is the sequel to the original game in 2007, not surprisingly called Two Worlds. I tried to get into it a few times back then, but even though I usually get on really well with this sort of game it never quite clicked.

But this new game is a whole different story. Playing on 360 I was immediately impressed how much better everything looks. It's not just that they are brighter and cleaner, but there is a much greater diversity of locations and environments.

Although I was never very motivated to dig into the world of the first, it is much more engaging here - monsters are scarier and equipment more appealing. I'm a bit of a magpie with videogames and like to collect all the shiny treasures - so I was in my element here.

After a while I got used to how the game looked and started to get my head around the fighting. Two Worlds 2 has a combat system that streamlines the first game's combination of offensive and defensive moves.

Some of my mates are into Final Fantasy (360) and other Japanese role play and were slightly condescending about the more simplistic fighting. But actually I didn't mind. This is much more fun, and I don't have to micro manage my party or use specialist weapons to progress.

Where Two Worlds excels is in its crafting system.

While I could defend Two Worlds 2's fighting, I had to admit the story wasn't all that exciting. Well, it was exciting, but in a way I had seen many times before in videogames. If you are after an engaging narrative then maybe this isn't for you. But if, like me, you just want to escape to a world where you can battle monsters and play the hero you'll find plenty to do.

Where Two Worlds excels is in its crafting system. This means you can take two very different items and combine them to create something new and unique. Pretty much everything can be crafted, brewed, or salvaged.

Sometimes I had collected too much equipment - as I mentioned, I'm a bit of a hoarder. A good way round this is to break old weapons down to their constituent elements and then use them to upgrade your favourite sword or bow.

Along the way you can also pick up dyes and pigments that let you colour code your equipment and clothing. Then there are thousands of alchemical ingredients to find that, combined with the right pigments and dyes can create all sorts of potions.

I got lost in the pursuit of these different elements for hours at a time, when all thoughts of pressing on with the adventure were left by the wayside. But I think it;'s good that the game lets you go off and do this rather than forcing you down a narrow path.

The sheer amount to find, identify and use is staggering.

I would have preferred a little more investment in visuals and voice work though. Some of the gruff forced accents sound funny when they should be scary and some are downright annoying. Unfortunately the script isn't all that much better either.

At the end of the day Two Worlds 2 isn't about a compelling story or intriguing relationships. Like the first game it offers a world to explore and interact with. But unlike the first game, this is more engaging, varied and complex. The sheer amount to find, identify and use is staggering.

Two Worlds 2 drew me in with a nice looking world, but kept me there with its drip feed of armour, weapons and potions. I like collecting things (Animal Crossing (DS) is the bane of my life) and Two Worlds 2 seemed perfectly targeted at someone like me.

You can support Rowan by buying Two Worlds 2