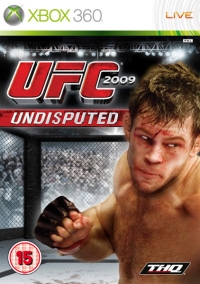 UFC 2009 Undisputed is a fighting game that holds its own against the other big names in the genre. It has surprisingly deep and satisfying combat and a really addictive multiplayer experience, all backed up with fantastic visuals. My friends were already fans of Ultimate Fighting Championship and we loved this game.

Ultimate Fighting Champion 2009 Undisputed is based on a real life sport where combatants use a variety of mixed martial arts like boxing, kick boxing, judo and wrestling to win. The game is more like EA's Fight Night series than the button-mashing Tekken franchise.

What little I know about real world UFC fights I've picked up while listening to friends talking about it in between lessons at college. So when I first put UFC Undisputed 2009 disc into my 360, I wasn't sure what to expect.

I was surprised to find such a deep combat system in a brash game like this. Although it was initially overwhelming and difficult I soon works things out and felt at home. It throws a lot of techniques at you all at once in the tutorial but once I was actually got into the game proper I couldn't really remember much of what I had learnt. Although I still don't feel I've fully grasped the system, I have enough idea of what's going on to feel at home.

When a strike like this is landed it never failed to leave me feeling like a great fighter.

Just like real UFC fights, the combat has a constant air of unpredictability - one well timed punch can drastically alter the flow, or even suddenly end the match. When a strike like this is landed it never failed to leave me feeling like a great fighter. I loved how the mouth guard of your opponent flies out - incredibly satisfying in the post-match replay. Of course, knockdowns like this can work against you. Many times I squandered a leading position by a lucky punch from my opponent.

The game features a pretty huge roster of fighters, all of which were unfamiliar to my friends. Yuke's have clearly spent a lot of time getting the each fighter to look like their real life counterparts. During particularly scrappy encounters the fighters can become visually damaged, sporting some realistic looking wince-inducing injuries.

Career mode is essentially a string of exhibition matches surrounded by a plot. I use the word 'plot' here in the very loosest sense of the word, as all you are trying to do is take a custom fighter up through the rankings, until you win the title belt. There is next-to-no interaction with other fighters; you do receive emails asking you partake in events like public experiences and autograph signings, but these are all text-based interactions that really only get in the way of the action.

While the career is a little weak, the multiplayer modes really excel. You can take the fight online against a random opponent or go toe-to-toe with someone on your friends list. Matchmaking worked well, with very little problems on the technical side of things, which tends to be a problem with the online portions of games in the genre.

The most fun I had with UFC was when I was playing it with a couple of college friends who were in the same room as me.

But the most fun I had with UFC was when I was playing it with a couple of college friends who were in the same room as me. We played winner stays on, passing the controller back and forth. Some fights were quick and messy brawls while others were slower paced tactical fares, relying on takedowns and submissions to get the win. Whatever the outcome we always wanted another rematch. It really reminded me of playing multiplayer modes when online functionality wasn't really prominent. It's an experience that is too often missing from games these days.

UFC 2009 Undisputed is a solid fighting package - the realistic combat is supplanted with extremely deep mechanics, great visuals and fantastic atmosphere. It's a shame that the single player mode is a bit dull, but the multiplayer make up for this. If you are fan of fighting games I would recommend you at least check out UFC 2009 Undisputed, but if you are already a fan of sport you really need to play this game.

You can support Rowan by buying UFC 2009 Undisputed